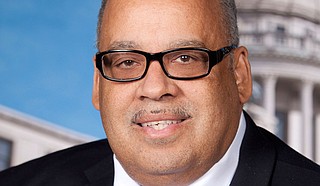 Democratic Rep. Earle Banks of Jackson said last week that he had tested positive for coronavirus. His daughter, Kim Banks, wrote Thursday night on Facebook that her father had been admitted to a hospital because of it. Photo courtesy Mississippi House of Representatives

JACKSON, Miss. (AP) — Mississippi Gov. Tate Reeves said Friday that even as coronavirus cases continue to grow, it will be important for children to return to classes, either in person or online.

Mississippi has a decentralized education system, with local school districts deciding how to reopen. The academic year begins in the next few weeks, and districts face a July 31 deadline to submit their pandemic reopening plans. Some have said they will offer a combination of in-person and online schedules.

“I can think of nothing more essential than a child’s education,” Republican Reeves said Friday. “Missing so much time, especially early on in their schooling, could and would destroy lives. ... Those that are privileged have an advantage, while kids without fancy iPads and without parents who can watch them full-time may never recover.”

Reeves closed Mississippi schools in mid-March as the virus started to spread, and students finished the final few weeks of the academic year with online classes or with packets of work that were sent to their homes.

Before the governor’s news conference, several educators rallied outside the state Capitol to express concerns about the safety of in-person classes. They said social distancing will be difficult.

Reeves said at least $150 million is going to schools for masks, hand sanitizer and protective equipment.

“There is no safe way to abandon education,” he said.

At least two Mississippi lawmakers are hospitalized because of COVID-19.

Democratic Rep. Earle Banks of Jackson said last week that he had tested positive for the virus. His daughter, Kim Banks, wrote Thursday night on Facebook that her father had been admitted to a hospital because of it.

“All prayers and and well wishes welcome,” she wrote.

Republican Rep. Manly Barton of Moss Point also has been hospitalized this week because of the virus, and he has been in intensive care for part of the time, according to family and colleagues.

At least 30 legislators and 11 other people who work in the Mississippi Capitol are known to have tested positive for the coronavirus, state health officer Dr. Thomas Dobbs said this week.

Mississippi legislators were in session during most of June and left the Capitol on July 1. Some people at the Capitol wore masks and kept distance between themselves and others, but many did not. Banks often wore both a mask and a plastic face shield.

Mississippi has a population of about 3 million. The Health Department said Friday that the state has had at least 40,829 confirmed cases and at least 1,332 deaths from the coronavirus as of Thursday evening. That was an increase of 1,032 cases and 24 deaths from numbers reported the day before; the figures included seven deaths that occurred between May 11 and July 7, with information from death certificates just arriving.

The department said Friday that 1,076 people were hospitalized with confirmed or suspected cases of the virus. That is up from 664 on June 22.

At least 3,122 cases of the virus have been confirmed in long-term care facilities such as nursing homes, with at least 642 virus-related deaths in those facilities, the department said.

The true number of virus infections is thought to be far higher because many people have not been tested, and studies suggest people can be infected without feeling sick. While most people who contract the coronavirus recover after suffering only mild to moderate symptoms, it can be deadly for older patients and those with other health problems.