Rukia Lumumba: Governor's Veto is 'Roadblock to Justice' for Incarcerated 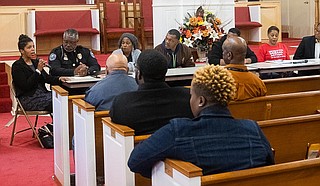 Attorney and activist Rukia Lumumba (left) addresses attendees of a public forum on gun violence in Jackson at the Mt. Helm Baptist Church in downtown Jackson on Jan. 20, 2020. Photo by Seyma Bayram

JACKSON, Miss. (AP) — People seeking improvements in Mississippi's troubled prison system said Monday that they want lawmakers to overturn the governor's veto of a bill that could make more inmates eligible for parole.

Mississippi has one of the highest incarceration rates in the U.S., and its prison system came under investigation by the U.S. Justice Department in February, weeks after outbursts of violence led to the death and injury of several inmates. More than 50 inmates have died in Mississippi prisons since late December, and multiple lawsuits say that prisons are crowded and filthy.

The bill—which passed with bipartisan support—said people convicted of nonviolent offenses could become eligible for parole after serving 25% of their sentence. Those convicted of violent offenses and sentenced between July 1, 1995, and June 30, 2014, would have become eligible for parole after completing 50% of their sentence or after 20 years, whichever comes first.

The bill did not guarantee release, only the opportunity for inmates to apply to the state Parole Board, which has members chosen by the governor. Habitual offenders, sex offenders and inmates sentenced for capital murder would not have been eligible for parole.

Inmates housed at the East Mississippi Correctional Facility alleged squalor conditions, solitary confinement practices, lack of medical and mental health care, and an overall unsafe environment in a lawsuit filed in 2013 against the Mississippi Department of Corrections.

The Rev. Wesley Bridges of Lawrence County, executive director of Clergy for Prison Reform, said Monday that people seeking changes are “tired of broken promises by incoming and outgoing governors about what they're going to do for prison reform.”

"When it's time to step up, they buckle at the knees and succumb to outside pressure from those who care nothing about lives and lives that are being lost in prisons,” Bridges said.

Reeves, who became governor in January, said when he vetoed the bill that he had received calls from law enforcement officers and prosecutors concerned about the release of inmates with violent histories.

“While the spirit of Senate Bill 2123 is well-intentioned, I believe the scope of its proposed expansion of parole eligibility presents problems that have not been fully considered by all stakeholders and as drafted would threaten public safety,” Reeves wrote in his veto message.

Overriding a veto takes a two-thirds majority in the House and Senate, which means several opponents would have to flip positions. Advocates said Monday that they are talking to legislators, but they did not indicate whether they’ve lined up enough support for an override.

Legislators have been away from the Capitol since July 1 and some have had COVID-19. Leaders have not said when the House and Senate might return.