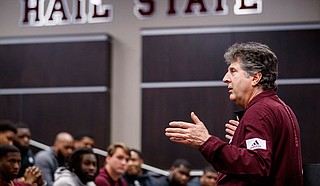 STARKVILLE, Miss. (AP) — During a time in which a Mississippi State sports team has not competed in a live game in over three months, much attention has turned to recruiting and roster management.

In the summer months, football recruiting is always a hot topic anyway.

Coach Mike Leach and his staff have secured 10 known commitments for the class of 2021.

Mississippi State moved up in the national rankings when Theodore Knox, a four-star receiver from Texas, and Myzel Williams, a defensive back from Florida, recently committed. But the Bulldogs still rank 51st and toward the bottom of the SEC, according to 247Sports Composite team rankings.

Those numbers, though, don’t matter much to Leach. Even prior to the two recent commitments, he told the Clarion Ledger he liked where his class stood. Leach used an analogy to describe why rankings, stars and the like aren’t what he obsesses over when searching for players for his program.

“It’s a little bit like you asking me to proofread your articles. You don’t do that,” Leach said. “I don’t ask reporters or recruiting services to proofread my recruiting class. It’s more important for us to think independently and figure out who we think can play. That’s why they put us in a position to do it.

Leach has been a college head coach for 18 seasons. At Texas Tech, where he spent 10 of those, Leach never had a recruiting class ranked in the top 25. At Washington State, his best class ranked No. 42. His classes have ranked outside the top 50 in eight seasons.

And yet, Leach is still a proven winner.

Leach is who he is. He doesn’t try to be somebody else for the sake of securing top-rated recruits. ESPN recruiting analyst Tom Luginbill said that won’t change at Mississippi State.

“He’s unique,” Luginbill said. “He’s quirky. He’s authentic. What you see is what you get. I think that resonates with kids. They might see something at a podium or something on the sidelines or something in a postgame press conference and say, ‘Ah, this guy is just putting on an act.’ He’s not. That’s him. That’s exactly who he is.”

And as far as recruiting rankings go, Luginbill said the reality is that nobody will truly know how good a class is until two or three years down the road.

Those classes weren’t nationally renowned by the numbers. But they were good enough for Leach to have success in his systems. Luginbill sees it happening the same way at Mississippi State.

“That’s a developmental program,” Luginbill said. “I don’t use that phrase to sound like it’s a detrimental thing. It’s not. The developmental side of it is often times at a place like Mississippi State, you’re going to have access to some guys that are maybe not play right away guys, but they’re guys you can redshirt and groom and develop and the next thing you know they’re a redshirt sophomore and a three-year starter for you.

“Those are the types of guys Mike Leach is used to coaching because in his previous stops, those are the only types of guys he had access to getting. But he’s clearly still been good with them, and that’ll likely continue in Starkville.”