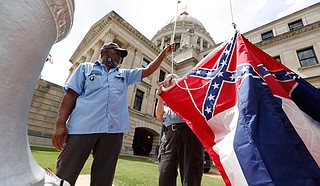 The commission that will design a new Mississippi flag without the Confederate battle emblem will meet for the first time Wednesday, possibly without full membership. Photo by Rogelio V. Solis via AP

JACKSON, Miss. (AP) — The commission that will design a new Mississippi flag without the Confederate battle emblem will meet for the first time Wednesday, possibly without full membership.

Republican Gov. Tate Reeves on Tuesday still had not appointed his three members to the nine-person commission. He said during a news conference Monday that he's spending most of his time on response to the coronavirus. Lt. Gov. Delbert Hosemann and House Speaker Philip Gunn, who are also Republicans, announced their appointees last week.

“Gov. Reeves’ top priority right now is ensuring the health and well-being of all Mississippians during this unprecedented pandemic, working around the clock with our state health experts to limit transmission," his spokeswoman, Renae Eze, said in a statement to The Associated Press on Tuesday. “The Governor will announce his appointees once he’s had the opportunity to review the limited options from which he’s able to choose.”

Legislators voted in late June to retire the 126-year-old Mississippi banner that was the last state flag in the U.S. to include the Confederate battle emblem that's widely condemned as racist. The change came after a groundswell of support from business, religious, economic and sports leaders as widespread protests focused attention on racial injustice.

Reeves signed the bill into law June 30, after saying for years that he thought voters should decide whether to keep the Confederate symbol on the flag, as they did in 2001.

The lieutenant governor and the speaker were not limited in choosing members. Each appointed two white people and one African American. Hosemann chose Reuben V. Anderson, who is president of the Archives and History board and was the first African American justice on the Mississippi Supreme Court, serving in that position from 1985 to 1991.

The commission is scheduled to meet at 10 a.m. Wednesday at the Museum of Mississippi History and the Mississippi Civil Rights Museum — two entities under one roof in downtown Jackson.

The state Department of Archives and History has asked the public to submit flag ideas that have simple designs and meaningful symbols. Those will be shared with the commission, which must finish its work by mid-September. Its lone design will go on the Nov. 3 ballot. If voters accept it, the design will become the new state flag. If voters reject it, the commission must draw a new design following the same rules, and that would go on a later ballot.