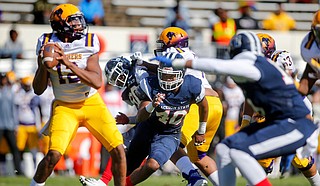 The Southwestern Athletic Conference has decided to postpone fall sports for the 2020 school year. A vote by the schools presidents means fall sports will be played in the spring and the decision affects football, men’s and women’s cross country, volleyball and women’s soccer.

In 42 of the last 43 years, the SWAC has led attendance at the Football Championship Subdivision also known as the FCS. Jackson State led all schools in the FCS in attendance last year with 30,000 per game.

The SWAC is planning on playing a seven game schedule with six conference games. Four of those conference games will be against divisional opponents with two being cross-division foes. Teams will have the option to play one non-conference game as the seventh game.

Currently the plan is for an eight-week camp for teams to prepare for the spring season in late January. The spring football would begin in February or March contingent on the current pandemic being under control.

The SWAC is not the first conference to make a decision on fall sports. The Mideastern Athletic Conference, the other conference with historically black colleges and universities, has also decided to postpone fall sports.

Both the SWAC and the MEAC play a season opening game known as the SWAC/MEAC Challenge that is played on a neutral field and broadcast by ESPN. The two conferences send the winners of their respective conference championship games to play in the Celebration Bowl.

The Southeastern Conference, of which Mississippi State and the University of Mississippi are members has yet to make a decision. The SEC will decide what it's going to do by July 31.

Conference USA, of which the University of Southern Mississippi is a member, hasn’t made any decision on the 2020 season. The conference could be waiting for what the other major conferences decide to for fall sports.

At the Division II level, Mississippi College and Delta State University are waiting on the fate of fall sports. The Gulf South Conference has yet to make a decision and is leaving things up in the year for the MC and DSU.

The American Southwest Conference at the Division III level hasn’t made a decision on 2020 fall sports. Belhaven University is waiting on the SWC decision to know if there will be Blazer football in 2020.

One team knows they won’t be playing football in 2020. Millsaps College won’t play any fall sports. The Southern Athletic Association has cancelled fall sports and that ended Millsaps dreams.