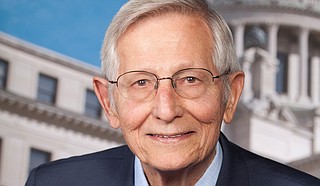 Dearing — often called Bob M. by his friends and colleagues — was a Democrat who was first elected to the state Senate in 1979. He served 32 years before he was defeated in 2011 by Republican Melanie Sojourner.

In a 2015 rematch, Dearing defeated Sojourner in a district covering Adams, Amite, Franklin and Pike counties in southwestern Mississippi. Sojourner challenged her loss, claiming irregularities in the voting process. Senators found during a 2016 hearing that Dearing had won fairly.

Dearing chose not to seek reelection in 2019.

In 2018, Dearing sponsored a bill signed into law by then-Gov. Phil Bryant, a Republican. It added two years of jail time to first-offense dog-fighting convictions and introduced stiffer penalties for second and subsequent offenses.

The current Senate Democratic leader, Derrick Simmons of Greenville, said in a statement Thursday that he and his colleagues are mourning Dearing's death.

“Sen. Dearing always sought to benefit the state, the education system and his district,” Simmons said. “He was an advocate of any legislation that bettered Mississippi.”

Dearing wrote a law in the 1990s that made retirement income exempt from state income tax. As he prepared to retire from the Senate on July 1, 2019, he told The Associated Press that the retirement legislation was a top accomplishment, along with two other landmark pieces of legislation he supported — the 1987 highway act and the legalization of gambling in the early 1990s, which led to thousands of jobs in casinos along the Mississippi River and the Gulf Coast.

The 1987 highway act included the widening of U.S. Highways 61 and 84, both vital to Natchez. “That was very, very important for safety,” Dearing said last year.

One of his daughters, Daye Dearing, told the Natchez Democrat newspaper that she and her two siblings knew their father as a loving, kind, generous and loyal person.

“Being patient was one of his best qualities,” Daye Dearing said. “He was honest, straightforward and a man of his word.”

She said her father thrived on being a public servant: “He loved being useful and helpful to others.”