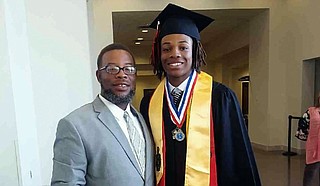 Cedrick Wilder, 46, teaches students both in the classroom and on the football and baseball fields.

“I treat them like I would my own son,” he says. “When I’m dealing with young men I try to guide them in the correct way. I carry myself to the same standard.”

“He inspired many young black males, kept us positive (and) reminded us about the importance of an education. He never used foul language, never said a bad word and treated everyone fairly,” Wilder says.

Starting his coaching career at Independence High School in Coldwater, Miss., as the head coach for the football and baseball teams, Wilder has since taken his skills to other schools throughout his 20-year career, including Velma Jackson High School, Vicksburg High School and presently Pelahatchie High School.

In addition to sports, he also teaches economic and government classes, and he notices similarities between the two environments.

“The concepts can be the same. The issues in the classroom are like issues on the field. Respect goes both ways and you have to give respect to get that. Sometimes you have to understand where kids are coming from. Poverty affects some kids. You have to make sure they eat and handle their business in the classroom,” he says. “I’ve had to pick up kids at 2 in the morning before, pick them up before they get in trouble. Build a rapport with them, learn how to know them.”

The relationships Wilder constructs with his students last over time, too.

“I had one student recently who called me to thank me for doing all these things for him. He’s now a police officer in Tate County. I told him I did all those things out of love,” he says.

As the head official of the Northwest Rankin Athletic Association Wilder organizes tournaments, ensures tournaments are sanctioned, and introduces the craft of being an umpire, a role Wilder particularly revels in, to younger people interested in learning the complexities of the job and the imprint an umpire can have on the game of baseball.

“Kids as young as 6 to 8 years old, and up to 13 or 14 are who I teach about being an umpire. They can at the same time learn the game. I meet kids who I have never met before and get to know them. It’s a completely different experience from playing the game,” he says.

Baseball has always had a special place for him not only as his favorite sport to watch and coach, but also within his own history, as he gained his appreciation for the sport while playing for the regional minor league team, the Jasper Jets, based in Jasper, Ala., his hometown.

“We would travel all over the South—Alabama, Tennessee, Georgia. The whole community would watch the games,” he says. “It was an honor to play for the same team like my dad and uncle. I just got hooked on it when I was a kid.”

He appreciates the simplicity of the sport. “Baseball’s a game of angles. You don’t have to be the most athletic person like football or basketball. You need hand-eye coordination. It’s fun to watch the kids make their first hit,” he says.

When reflecting on the memorable moments of his coaching career, a connection between his son and another young boy stands out.

Wilder coached his son, Cedrick “CJ” Wilder Jr., and taught him to umpire, which he says were two of his standout accomplishments over the years.

“There was this one boy, a left-handed pitcher, they had the same mannerisms, my son is also left-handed. It’s just amazing to look back on it,” he says. “When I was able to coach my son it was a great experience because I was away from him quite a bit growing up, and to be able to get that time with him was priceless.”