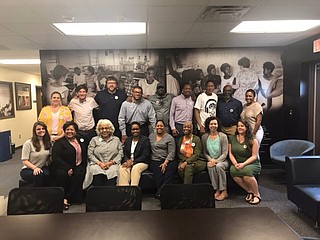 This story is reposted from the A New Flag for Mississippi website. Find the original article here.

On June 12, 1963, Medgar Evers, Field Secretary for the Mississippi NAACP, arrived at his home after midnight. As he exited his vehicle with a box of NAACP t-shirts that read “Jim Crow Must Go,” he was shot in the back by Byron De La Beckwith who was hiding about 150 yards away in a honeysuckle thicket. Evers’ assassination erupted in a national outcry, resulting in 5,000 angry protesters marching through the streets of Jackson.

Last week, in a call for racial justice, citizens from all walks of life throughout our state coalesced to protest the recent killings of George Floyd, Breonna Taylor, Ahmaud Arbery and countless other unarmed black citizens who have been pursued, ambushed and gunned down in cold blood for no other reason but the color of their skin. Black communities across our state are expressing anger and grief over modern manifestations of white supremacy, and all of us as Mississippians need to listen deeply.

In Mississippi, the state flag is the most visible symbol of white supremacy. For many black Mississippians, the flag is traumatizing because it is a constant reminder of oppression. Given the history of Confederate symbols and their association with violence against blacks by white supremacists and groups such as the Ku Klux Klan, many remain offended by these symbols. Even in the 21st century, the Confederate battle flag continues to rally those who peddle hate based on skin color, perpetrate race-based violence, and actively work to uphold systemic racism.

In 1894 as the Jim Crow system of power was emerging, nearly 30 years after the end of the Civil War and the emancipation of 4 million enslaved Africans, white lawmakers in Mississippi adopted the current state flag as an homage to the antebellum era of slavery and white supremacy. It is a symbol laden with historical baggage that has flown over our state house for the past 126 years.

It is time for us to acknowledge the harm that the flag causes to many in our state. Attempting to remain neutral on the flag and refusing to act invalidates the experiences and the pain of those speaking out against racial injustice. That invalidation exacerbates the trauma the flag creates and builds further distrust. Symbols representing white supremacy, including the Mississippi flag, cannot exist simultaneously with an honest recognition that Black Lives Matter and should not exist in a forward-looking Mississippi.

If we refuse to change the flag, we will not be able to establish the trust necessary to bring our state together. Our state will continue to see young people leave the state, taking its potential with them, and businesses will overlook Mississippi for neighboring states.

Building trust across racial lines is necessary to build a strong Mississippi and a strong economy. As the Mississippi Economic Council states in its Blueprint Mississippi report, “Stronger race relations can help communities work together more effectively, ensure diverse future leadership, and transform Mississippi into a place recognized not for where it has been, but for how far it has come.” As our state confronts this wave of protests and the health and economic crises created by the COVID-19 pandemic, we have an opportunity to start rebuilding that lost trust and to choose symbols that reflect our values as Mississippians.

Medgar Evers was assassinated on June 12, 1963. In the wake of that tragedy, our communities had to stand back up and find a way to rebuild. Our country has been rocked by protests and demonstrations for the past two and a half weeks. Mississippi has the ability to make a bold statement for human dignity and, in doing so, give hope to young Mississippians that there is a future here.

How will we respond? We can create a new Mississippi for our children and grandchildren. As Myrlie Evers said in 1963, “You can kill a man, but you can’t kill an idea.” The new flag is an idea whose time has come. The annals of history have been filled with men and women who have spoken and stood for justice when history called. In this moment that demands bold, decisive leadership, we call on the legislature, Speaker of the House Phillip Gunn, Lt. Governor Delbert Hosemann, and Governor Tate Reeves to lead with courage and to lift up a flag of which all Mississippians can be proud.