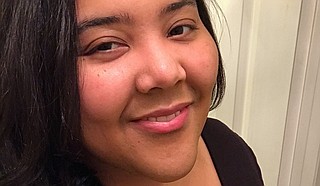 When Ariss King was a little girl, her parents took her to art museums and enrolled her in art camps to encourage her creativity. They wanted her to feel that anything was possible, particularly regarding her future as an artist, and she transformed what she learned in those long museum hallways and at paint-splattered art tables into a career.

Today, the 34-year-old King works as an artist and graphic designer with the Clinton Chamber of Commerce and with Wolfe Studio. Although her parents, Lee and Gloria King, started Ariss on her artistic path, she credits several other sources for her creativity.

"My time at Murrah High School was a great experience. I actually miss high school," she says, remarking that several of her peers at the local public school went on to become her coworkers and noting that she was still friends with many of her classmates. "I think it's a marker that you're on the right path when you're able to work with people you know and still make new connections."

King continued her educational career at Mississippi College, graduating with a bachelor's degree in graphic design and a minor in theater in 2014. During her time at the Clinton-based university, King took advantage of two unique opportunities: working as an intern at the Jackson Free Press and getting involved with the  college's theater department.

In between directing and acting in campus productions such as Steve Martin's colorfully titled "The Underpants" and the short "Kitty the Waitress," the artist worked closely with the JFP's Donna Ladd, the editor who guided King to her love for event planning. She found herself closely involved in organizing the JFP Chick Ball in 2012 and 2014 and assembling the Best of Jackson issue in 2013, 2014 and 2015.

"Those were the best years," King recalled. "My time at the JFP helped me learn to communicate with small businesses and help those businesses further their visions."

The small businesses that King serves now are the same businesses she was raised around as a native to the area. Through her work, she helps clients bring their goals to fruition through graphic design and other artistic mediums.

"Jackson businesses want to be progressive, especially in this pivotal time, and build something new for the younger people while still speaking to older people," King says.

The finished products help the businesses "tell their stories well," she says, which King believes is the lifeblood of her work—and of the Jackson business scene as a whole.