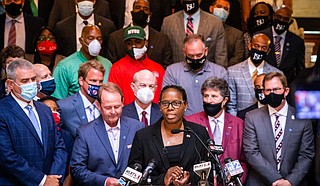 University coaches and Christian ministers filled the Mississippi Capitol on Thursday, urging legislators to seize the moment and remove the Confederate battle emblem from the state flag while Americans are reckoning with difficult discussions about race and history. Photo courtesy Mississippi State Women's Basketball

JACKSON, Miss. (AP) — University coaches and Christian ministers filled the Mississippi Capitol on Thursday, urging legislators to seize the moment and remove the Confederate battle emblem from the state flag while Americans are reckoning with difficult discussions about race and history.

Mississippi is the last state with a flag that includes the emblem that many see as racist.

Confederate monuments and other symbols are being removed in parts of the U.S. amid widespread protests over racial injustice after the videotaped killings of Black people, sometimes by police.

Former Mississippi Gov. Phil Bryant on Thursday advocated a state flag design that would eliminate the Confederate battle emblem — a red field topped by a blue X with 13 white stars.

“I was proud as Governor to add ‘In God We Trust’ to the State Seal,” Republican Bryant wrote on Twitter. “It will make a great Mississippi State Flag.”

Bryant left office in January after eight years as governor and four before that as lieutenant governor, and he never pushed the politically volatile issue of changing the flag during his time in office.

White supremacists in the Mississippi Legislature put the Confederate emblem on the upper left corner of state flag in 1894, during backlash to the political power that African Americans gained after the Civil War.

Mississippi voters chose to keep the flag in a 2001 statewide election, but the design has remained contentious.

The state's annual legislative session is almost over, and it takes a two-thirds majority of the House and Senate to consider a bill after the normal deadlines have passed. Legislative leaders continued working Thursday to build a bipartisan coalition to reach that margin to bring a flag bill up for debate in the next few days.

Current Republican Gov. Tate Reeves said Wednesday, for the first time, that “a veto would be pointless” if legislators attain a two-thirds majority. That's same margin needed to overturn a veto. Reeves said, though, that he prefers having a statewide election to let voters choose a flag design.

Legislative Black Caucus members say lawmakers should tackle the issue because another statewide flag vote would be divisive.

Republican state Sen. Melanie Sojourner of Natchez said she wants to keep the flag. Like Reeves, she said she thinks people should vote on the issue.

“So many people when I talk to them, I ask them what do they find offensive? And I certainly realize some people do,” Sojourner said. “They always go back to, ‘Well, it’s racist’ because of the way it was used in the 1960s. Well, the Klan used the Stars and Stripes more than it used the battle flag. It used the Christian cross. I mean, they use other symbols. So, where do we draw the line?”

The NCAA said last week that it is expanding a policy that bans states with prominent Confederate symbols from hosting its sponsored events. The announcement came a day after the Southeastern Conference made a similar declaration aimed at the Mississippi state flag. The current NCAA ban, in place since 2001, applies to what the NCAA calls predetermined sites, such as for basketball tournament games.

“We can’t be an elite program without hosting postseason events,” said Nikki McCray-Penson, who was hired this year as the Mississippi State University women’s basketball coach.

Speaking Thursday at the Capitol, McCray-Penson said the Confederate emblem is “a symbol of hatred.”

“As a Black woman coaching at one of the most diverse universities in the country, I look forward to seeing change that unites us and accurately represents our great community,” she said.

The pastor Buckley said that although many people have wanted to change Mississippi's flag for years, support for doing so has grown in recent weeks. International protests have focused on the police killings of African Americans George Floyd in Minnesota and Breonna Taylor in Kentucky and the killing of another Black man, Ahmaud Arbery, in an encounter with white men while he was out running in a coastal Georgia neighborhood.

Speaking to Mississippi legislators facing a decision about the flag, Buckley said: “You’ve been given the right crisis needed to do this. America has been reminded again of the infectious sin of racism and how it corrodes the human spirit and corrupts human interactions."