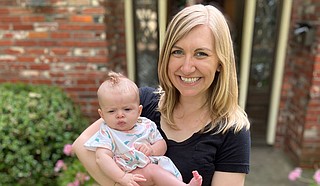 Sometimes, babies arrive earlier than their due dates. We all know this. Oftentimes, the premature debuts are no big deals and simply serve to allow parents to love their child even sooner than they expected. For Marianna Stone, her daughter’s early arrival was fortuitous, as the family narrowly avoided having to bring Esther into this world in the midst of a pandemic.

Esther Stone was born on March 4, 2020. Had she been born on the expected due date, Marianna and her husband Stephen would have had to undergo the birthing process at a time when hospitals were bustling with health professionals trying to tackle the COVID-19 crisis.

Nevertheless, Marianna feels that becoming a first-time mother shortly before having to enter quarantine has been a blessing.

“It’s really nice to have a baby to take up my attention and have something good and hopeful to think about while there is so much craziness happening in the world," she says.

While the Stones have not been able to share their newborn with others as often as they had anticipated, they still remain connected with family, friends and their church community. The family attends Redeemer Church in Jackson.

“In some ways, we have felt really close with our church community, especially in the beginning. People were bringing us meals and really setting up for us in big ways. … On Sundays, it was nice that our church would video (sermons), and we were able to watch that together and be connected to our church in that way.”

Originally from Forest, Miss., Stone completed her undergraduate career at Mississippi College, where she earned a bachelor’s degree in English literature. She then went on to receive her master’s degree in the same field from Baylor University in Texas. Afterward, she returned to Mississippi to work in MC’s English Department for three years as an adjunct professor, teaching English literature and composition.

“I really longed to be a part of the community in Jackson, and I loved the good things going on here. I loved the warmth of the culture and the community,” Stone says. “I traveled a lot around the world and around the states, and I feel like Jackson is this very special place. It’s underrated in a lot of ways. I felt a longing to come back because I loved it, and that I need to come back because there’s growth happening that I want to be a part of—change that needs to happen, that I want to help be part of, too.”

Furthering her education through Reformed Theological Seminary, learning about counseling. She moved on to Madison Ridgeland Academy to teach during the 2017-2018 school year, but decided to pursue a job in higher education again, becoming student development director at Belhaven University.

At Belhaven, Stone helped students connect with one another by organizing events where they would gather and also introduced students to opportunities to become involved in their local communities.

“I like connecting people to things, to ideas. That’s something that I love about teaching English, especially,” she says. “I helped students with leadership development, helping them get connected to ways to serve and to grow … All students get involved with learning what their strengths are and then using those strengths in service to others.”

While she is presently only able to watch church services from home, during times of normalcy Stone is involved with her church, where she sings in the gospel choir and serves as a small group leader.

“It’s my favorite part of life in Jackson. It’s just a really good community, and I love that people are all unified,” she says. “We come from vastly different socioeconomic backgrounds and ethnic backgrounds, so it’s been really cool to grow with people there and with that.”

Normally, during her free time, Stone enjoys cooking and hosting alongside her husband, Stephen, who is a medical resident at the University of Mississippi Medical Center. Due to COVID-19, any gatherings they have had recently have been small and have largely been exclusively in the open-air of her backyard.

And, of course, more than anything the couple loves raising Esther.