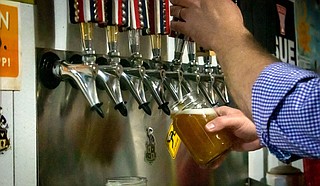 Walking into LD's BeerRun, you quickly notice the homey nature of the store. If you walk in there with any level of beer enthusiasm, you will find a beer you like, because they follow a similar motto to my own, "If you don't like beer, you haven't found the right one." For this review, I sampled four of LD's own beers that the store keeps on tap.

Chris Edwards handed me my first sample of the night, The (L) to the (G), which was sour, but not too sour. You can really taste the way the lemon and grapefruit mingle in the sour mash. I personally have never thought of lemons and grapefruit combining well, but it opened my eyes and delighted my taste buds. It was not too alcoholic for a craft beer, landing in at 5.5% alcohol by volume and it is super refreshing. It is the perfect beer for sitting out with the boys on a warm summer evening.

The second I tried was the Jacktown Haze. Edwards explained that the Jacktown is their most popular beer, and I can see why. The Jacktown Haze is slightly more bitter than the traditional New England IPA, which produces a completely different taste and mouth feel. Coming in at a respectable 7% alcohol by volume, Jacktown Haze has a lot to love, and it will always be in the store, Edwards says.

The interesting thing about Jacktown Haze is that every time Edwards brews it, he changes something, making each new batch kegged a whole new beer, but still squarely in the vein of the original.

Next I had a taste of their newest beer, "The Wee Bit of Highland Heavyn," which is a pun considering that it is actually a wee heavy ale. It was by far my favorite beer. It was creamy and strong with hints of Scotch. As I sit here writing, two things are going through my mind. One: I wish I had gotten more of that beer. And two: there is no way I can do it justice in such short-form writing.

The fourth beer I tried was the "Bolshevik's Revenge" RIS, another recurring drink on the menu, but it had a twist as well. Edwards added chocolate and black currants to the mix, which served to just slightly sweeten this hardy beer.

The amount and love and care these men put into beer is incommunicable. Edwards can spend the better part of a night talking about beer, and Voss is like everyone's grumpy uncle. He seems a bit curmudgeonly, but he is just as nice and easy to talk to as anyone in the store.

If you love craft beer, you will love LD's BeerRun. The LD's guys were nothing but welcoming and helpful, and if you go in there wondering what beer to drink, just talk to them.

They know a beer that will fit with any taste and personality.