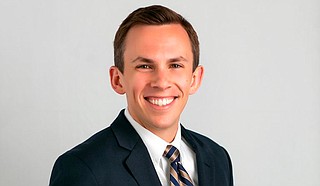 State Auditor Shad White's office launched an investigation in 2018, but has since declined to comment on it, the Sun Herald reported. Photo courtesy Mississippi Center for Public Policy

BILOXI, Miss. (AP) — The former superintendent of a Mississippi school district is accused in a federal lawsuit of using district funds and resources for his daughter's wedding.

The lawsuit accuses McMillan of using district funds, equipment and employees to deliver and set up tables for his daughter's May 2018 wedding.

Conway worked for more than 10 years as the administrative assistant to the district's child nutrition director, giving her “direct knowledge” about the use of the funds and resources, the lawsuit stated.

Conway told her mother, longtime district employee Lee Ann Dubaz, about the allegations, and then the two took their concerns to Dubaz's boss and school board member Jane Meynardie. The allegations were also reported to State Auditor Shad White.

White's office launched an investigation in 2018, but has since declined to comment on it, the Sun Herald reported.

Conway says McMillan learned of her complaint, in part because she was one of the few people who would have known about the use of school funds. She says that led to her direct supervisor, Dixie Eleuterius, mistreating her and causing “psychological harm,” the lawsuit stated.

Conway says she was fired after writing a public letter of complaint to the school board, WLOX-TV reported.