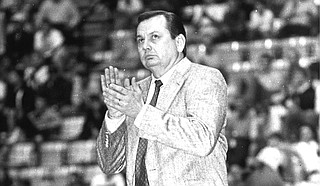 Since there will be no March madness this year, it is a good time to look back on the great coaches and players of the past. One of those great coaches, M.K. Turk, happened to be at the University of Southern Mississippi for the 1986-1987 season, his 11th season as head coach of the Golden Eagles. He entered the season returning all five starters from a squad that reached the National Invitational Tournament the previous year.

Southern Miss finished the regular season with a 17-10 overall record heading into the conference tournament. In those days USM played in the Metropolitan Collegiate Athletic Conference, also known as the Metro Conference.

The Golden Eagles won their first tournament game 83-66 over Virginia Tech University. USM fell 71-78 to the University of Louisville in the next game to knock them out of the conference tournament.

Turk and his Golden Eagles, though, learned they earned a bid to the NIT. Every team hopes to earn a bid to the NCAA Tournament, but the NIT has been around longer and is a nice consolation for 32 teams that get into it.

Southern Miss opened the tournament against the University of Mississippi. The Golden Eagles rolled to a 93-75 victory and moved on to the next round.

During overtime, USM passed Saint Louis University 83-78 in the second round. The victory moved the Golden Eagles one win away from playing in the NIT final four.

The third round saw Southern Miss take on Vanderbilt University. It is the second SEC squad that the Golden Eagles had faced in the tournament. USM slipped past the Commodores 95-88 to punch their ticket to the Madison Square Garden.

Turk’s squad opened the semifinals against the University of Nebraska. USM took down the Cornhuskers 82-75 to reach the championship game.

Southern Miss faced La Salle University in the finale. The Golden Eagles hit two free throws in the last six seconds to seal a 84-80 victory and the first NIT championship in school history.

There won’t be a NIT tournament played this season due to COVID-19. Hopefully next season college basketball returns to the normal madness for which March has become renown.

Until then, let's remember the magical season by the Golden Eagles who were led by a legendary head coach M.K. Turk.