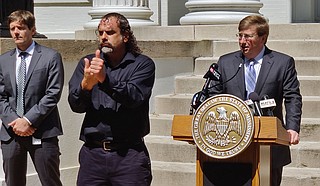 Ray Mabus, a former Mississippi governor and secretary of the U.S. Navy, says Gov. Tate Reeves (pictured at podium) must involve a strong shelter-in-place order in order to fight the spread of the coronavirus in Mississippi to replace the less-effective and confusing order he issued March 24. Photo by Nick Judin.

COVID19 is not a hoax. It doesn’t care if you are a Democrat or Republican or if you live in China or Italy or Mississippi. It does not discriminate based on gender or wealth or location or circumstance. While it kills more older people who catch it, it can also be deadly to the very young and all those in between. It is not the flu, and it cannot be ignored.

The places that do not have as many recorded cases as others cannot think they are somehow immune or lucky. The numbers may be low because people do not live so densely packed as in New York or other big cities or there just haven’t been as many tests done.

Since March 11, and as of Sunday, Mississippi has seen 758 confirmed cases with 14 deaths, including six new deaths over the weekend. There is one near-certainty: if we do not take dramatic measures like staying at home for all but the most essential reasons and practicing social distancing, the numbers will go up exponentially, and many more people we know and love will get very sick, and many more will die.

This is a human problem, an American problem and a Mississippi problem. Many Mississippi leaders like Moss Point Mayor Mario King, Columbus Mayor Robert Smith, Tupelo Mayor Jason Shelton, Southaven Mayor Darren Musselwhite, Jackson Mayor Chokwe Lumumba and many others have taken actions to meet the crisis including stay-at-home orders, curfews, and closing all restaurants and all but critically important businesses such as hospitals and grocery stores.

Those efforts were all but destroyed Tuesday, March 24, when Gov. Tate Reeves issued an executive order exempting virtually all businesses and workers and activities from precautions. Faced with a huge blowback, the governor retreated and said that local authorities could implement their own orders for their communities, as long as they did not affect his list of essential businesses.

The confusion that resulted was predictable. And it ignored the huge, inescapable point: if these precautions aren’t done statewide then these local actions may be for nothing. We don’t know where the virus is, but we do know that it goes everywhere unless everyone takes the same precautions. All reputable health experts say that everyone has to do the same things, or everyone is at risk.

If statewide orders aren’t put in effect, the state’s hospitals and health care workers will soon be overwhelmed. Many rural hospitals were already on the edge before this catastrophe. Mississippi does not have enough hospital beds, enough tests, enough protective gear, enough ventilators to meet this massive threat.

In any direction you look—Louisiana, Tennessee, Alabama—the numbers of those infected and those dying are going up with frightening speed. To think that parts of Mississippi will somehow be spared is not only delusional; it’s dangerous and deadly.

It’s been said that we are at war, and we are. I know from my years in the Pentagon that, if you expect to win, you do not fight piecemeal, and you use everything that you have. You don’t take half-measures, and hope is not a plan.

The governor needs to immediately invoke a statewide shelter-in-place order and enforce it. It should have been done a while ago, but even now it will help. To do anything less will almost certainly needlessly condemn people to serious illness and death.

Ray Mabus was Governor of Mississippi from 1988-1992 and Secretary of the U.S. Navy from 2009-2017. Read the JFP's full coverage of COVID-19 in Mississippi at jacksonfreepress.com/coronavirus