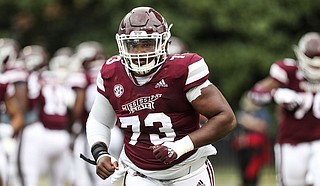 Shortly after the final pick of the NFL Draft, the dreams undrafted players have for a professional career are not over. NFL teams begin to scramble to sign the best players that weren’t drafted and those players can sign with any team.

Former Mississippi State University center Darryl Williams must have been highly sought after by teams after the draft, as he landed a major undrafted free agent contract with the Kansas City Chiefs.

The defending Super Bowl champions are giving Williams a $107,000 guaranteed contract that includes a $7,000 signing bonus. When a team gives an undrafted free agent that kind of money it means they expect him to have a great chance of making the team.

Williams brings versatility to the Chiefs as an offensive lineman. He ended up a three-year starter for the Bulldogs, playing in 45 games and starting 38 games. While at MSU, he started 25 games at guard and 13 games at center.

That means the Chiefs could play him at either guard or center at the NFL level. Being an undrafted free agent means the more you can do for a team, the harder it is for a team to let that type of player go after the preseason.

His versatility was seen during his high school days in Bessemer, Ala. where he ended up playing all five positions on the offensive line. He played in the 2014 Mississippi-Alabama All-Star game before heading to MSU.

In the 2015 season, Williams redshirted and didn’t get on the field. He got most of his playing time during the 2016 on PAT and field goals before a neck injury against the University of Kentucky ended his season with six games to go.

During the 2017 season he started all 13 games at left guard he was one of the best linemen on the unit. Williams' play against Louisiana State University earned him SEC Offensive Lineman of the Week.

As a junior, Williams played in 12 games after missing the Auburn University game with an injury. He played 45 snaps at center and was named to the SEC Fall Academic Honor Roll.

His senior season saw Williams play all 13 games at center and earn SEC Offensive Lineman of the Week Honors against the University of Southern Mississippi and the University of Mississippi. He was a team captain, 2019 Jason Witten Man of the Year semifinalist, 2019 SEC Fall Academic Honor Roll.

Williams was invited to play in the East-West Shrine Bowl and to participate in the NFL Combine. If COVID-19 had not cancelled the MSU Pro Day, there is a chance that Williams could have helped his draft stock.

Even without a Pro Day, though, he must have been highly coveted for the Chiefs to offer such a nice contract to an undrafted free agent. Now it will be up to Williams to keep his NFL dream alive by the work he does before training camp and during the preseason.