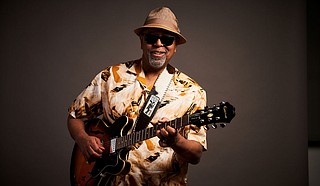 Zac Harmon held onto his traditional southern values during his careers in music and finance. Photo courtesy Darren Carroll

Zac Harmon may have left Jackson in his adult years to bolster his career as an award-winning guitarist, singer and songwriter who specializes in American blues, but he has always kept the lessons learned in his southern upbringing close to his heart.

The artist says the Jackson he left was a very traditional southern city, with all of the attributes that such a city affords, including a familial friendly vibe. His Jackson upbringing helped him be able to compete in other parts of the country.

"I was just so strongly rooted, you know?" he says.

Born and raised in Jackson, Harmon grew up in a household that valued both music and education. His mother played the piano and served as Millsaps College's first African American librarian, while his father played harmonica and earned his place as the city's first state-registered African American pharmacist.

"I came up during a time when it was about education in Mississippi," Harmon says.

In addition to his successful blues career, the Mansfield, Texas, resident established a successful career as a businessman in the financial sector. During his early days, he would often work from 7 a.m. to 7 p.m. in finance and then enter the studio at 9 p.m., only to leave at 4 a.m. and repeat the cycle, with the help of some coffee.

"Growing up in Jackson, the sky was the limit, as far as what we were going to do with our lives," he says, crediting Jackson for giving him the ability to say that he can do anything and be whatever he wanted to be. He continues, "There was just an infusion of the whole thought process of 'I can do it. No matter what, I can do it.' So we did it."

Becoming a blues musician happened organically for Harmon: "There was nothing that drove me to be a blues musician. That's like asking a lion what drives it to roar. Blues is the foundation of American music, and it just so happened that it was birthed in Africa, brought to America and nurtured in Mississippi and the other southern states."

Playing with many Jackson musicians while growing up, Harmon developed a strong appreciation for the knack the capital city had for cultivating artists.

Another element of Jackson that Harmon loved was the local music community. "It was an incredible microcosm of—and I would say the motherload of— music in America," Harmon says. "I came up through the Jackson music scene, which was probably one of the most fertile music scenes in America."

The musician still owns a home in Jackson and visits from time to time, with a couple of his favorite pastimes being to hunt and fish.

Harmon says another thing that is great about the state is that it has not been as affected by pollution as other areas in the United States have. "Mississippi as a state is just a beautiful place," he says.