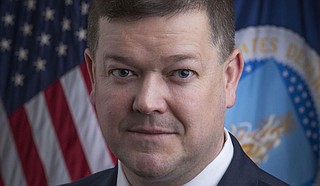 JACKSON — Today, Governor Tate Reeves announced that John Rounsaville will lead the Mississippi Development Authority as Interim Director to continue growing our state's economy and win business for Mississippi. John has a proven history of fighting and leading here in our state and on the national stage—having served in offices from Representative Charles W. "Chip" Pickering to Governor Haley Barbour and serving Presidents George W. Bush and Donald J. Trump.

"John has been a true servant of Mississippi for many years and been devoted to helping our state grow. I am honored that he will take on this role to build on our state's economic development successes. He will play a critical role as MDA Interim Director as we work to restart our economy and shift it into overdrive for the people of Mississippi," said Governor Tate Reeves.

John Rounsaville has a long career of serving the people of Mississippi, dating back to his various roles for Representative Charles W. "Chip" Pickering from 1998 to 2003. After serving as Rep. Pickering's Deputy Chief of Staff, Rounsaville joined Governor Haley Barbour's office as Policy Advisor from 2004 to 2006. He was then appointed by President George W. Bush as State Director for USDA Rural Development from 2006 to 2008. He served as Vice President of Strategic Services for Waggoner Engineering, Inc. following that from 2008 to 2017.

Appointed by President Donald Trump, he currently serves as State Director for USDA Rural Development. Rounsaville holds various distinctions for his military service, including the Air Force Meritorious Service, Commendation, and Achievement Medals, Global War on Terrorism Service Ribbon, and Mississippi War Medal. He also currently serves as serve as a JAG and Major at the 186th in the Mississippi Air Force National Guard. A graduate of Mississippi State University with a Bachelor's and Master's, as well as a Juris Doctor from University of Mississippi, he has consistently delivered for Mississippi throughout his career.

John and his wife, Laura, reside in Madison with their two sons, Luke (10) and Graham (8), and a baby girl on the way.