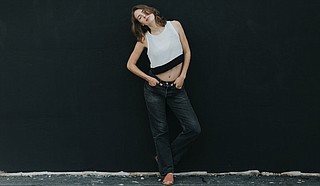 While she now resides near Asheville, N.C., Krista Shows is a Mississippi girl at heart. The 31-year-old music artist who called Jackson her home from the time she was 5 years old to her graduation from Madison Central High School released a new album titled “Prone to Wander” on May 1.

Born in Texas, her parents adopted her and brought her to the Mississippi Delta by the way of Greenwood, Miss., before later moving to Jackson. After high school, Shows enrolled in Mississippi State University, but she took a couple detours before completing her degree, spending time living in Los Angeles and Hawaii. Upon earning a bachelor’s degree in liberal arts, she moved to western North Carolina to work in wilderness therapy.

Eventually, Shows returned to Mississippi, moving to Clarksdale, which is where her musical journey toward becoming a professional performer took root. Her father served as a preacher with the Mississippi Baptist Convention Board, and she and her sister would often sing before his sermons—making music an outlet that already appealed to her. However, while waiting tables, she learned of and attended a songwriting workshop.

“I took that (workshop) and wrote my first song that week, and it just opened up the floodgates for me,” she says. “I didn’t realize that was something I could do or wanted to do until I just tried it. Part of the workshop was getting up and singing the song that you wrote in front of other people at the end of the week. So I did that, and I haven’t looked back.”

The artist attributes the mental and emotional benefits of making music as one of the main reasons she took up the craft.

“A lot of why I started writing was to process what was going on in my life at the time. It’s cathartic. It helps me heal more than any other art form I have taken part in,” she says. “I can paint all day, but there’s something about writing a song and then singing it that just allows you to let go.”

Shows describes her sound as a fusion of country and folk, with flavors of soul, and credits her upbringing in Mississippi as an influence to that sound.

After meeting fellow musician Scott Sharpe a little over four years ago, Shows self-released a raw album in a grain bin in Clarksdale. The two later moved to Asheville, N.C., where they began working with a studio on “Prone to Wander.” Other musicians who contributed to the album include Sharpe on guitars and pedal steel, co-producer Stu Cole on bass guitar, co-producer Bronson Tew on drums, Eric Carlton on piano and organ, and Schaefer Llana and Anne Freeman on backing vocals.

Of the tracks from the record, “High to Hell Water,” which Shows released as a single to preview the album, and the titular “Prone to Wander” are the artist’s favorite songs from the work.

“There’s a lot of loss, a lot of grief and a lot of learning that I’ve funnelled into the record, and I think that if you listen to it all the way through, you can clearly see that,” she says, adding that each song creates a story and that all the tracks culminate into a cohesive experience.

Since the COVID-19 crisis began, Shows has been keeping up with her fans through Instagram and through a mostly monthly newsletter, which people can sign up to receive via her website.

Additionally, she has been tending her salad gardens, in which she grows lettuce, beats, radishes, onions, carrots and other vegetables. A self-proclaimed “nature freak,” gardening is one of her favorite pastimes, and she has been able to delve further into the soil since going into quarantine.

Find Krista Shows’ music on Spotify, Apple Music, Amazon Music and other streaming platforms. Digital copies of the “Prone to Wander” album are available through Bandcamp, and physical copies can be purchased at kristashows.com/store.