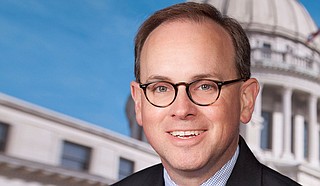 The U.S. Senate Judiciary Committee was scheduled to hold a hearing Wednesday on Cory Wilson's nomination to the 5th U.S. Circuit Court of Appeals, which handles cases for Louisiana, Mississippi and Texas and is known as one of the most conservative. Photo courtesy Mississippi House of Representatives

JACKSON, Miss. (AP) — The American Bar Association is rating a Mississippi judge as “well qualified,” but Cory Wilson's federal appeals court nomination is drawing opposition from advocates for voting rights, expanded access to health care and marriage equality, among a range of Democratic priorities that Wilson has pilloried.

The U.S. Senate Judiciary Committee was scheduled to hold a hearing Wednesday on Wilson's nomination to the 5th U.S. Circuit Court of Appeals, which handles cases for Louisiana, Mississippi and Texas and is known as one of the most conservative.

Wilson, 49, was first-term Republican state representative when he was appointed to Mississippi's state Court of Appeals in February 2019 by then-Gov. Phil Bryant, a Republican allied with President Donald Trump. Before that, Wilson had been appointed to various state government jobs.

A majority of those handling the American Bar Association ratings said Wilson is “well qualified," while a minority ranked him “qualified.” Wilson has the support of Mississippi's Republican U.S. senators, Roger Wicker and Cindy Hyde-Smith.

“He is a smart, thoughtful, conservative jurist who will follow the rule of law,” Wicker said.

Opponents of Wilson's nomination point to a long series of partisan comments he's made, attacking President Barack Obama and many Democratic party priorities. The Houston Area Urban League and the Baton Rouge National Organization for Women are among 13 groups that issued a letter Tuesday opposing Wilson's nomination.

It criticized his record of supporting states' laws that require voters to show identification at the polls.

“Mr. Wilson’s refusal to acknowledge the reality of this country’s history of voting rights violations and the prevalence of voter suppression is unsettling and indicates he would not have an open mind in such critical civil rights cases that often arise in the Fifth Circuit," the letter said.

The letter also criticized articles Wilson wrote about Obama's signature health care law, the Affordable Care Act. It said that in a 2013 article, Wilson referred to the law as “liberal-utopia-dictated healthcare."

Ozerden said he was following a binding precedent by the 5th Circuit, but his nomination stalled and never came up for a confirmation vote. Trump announced Wilson’s nomination to the seat on March 30.

Trump initially nominated Wilson to become a federal district judge in southern Mississippi in 2019. The Judiciary Committee held a hearing on that nomination in January, but the nomination was still pending when Trump chose Wilson for a higher court.

Wilson earned his undergraduate degree from the University of Mississippi and his law degree from Yale University, where he worked on the Yale Law Journal. He was a law clerk to Judge Emmett Ripley Cox of the 11th U.S. Circuit Court of Appeals.