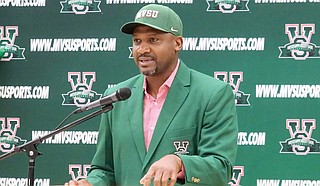 Current Mississippi Valley State University head coach Lindsey Hunter is set to be inducted into the 2021 calls of the Mississippi Sports Hall of Fame. The class was announced on Oct. 27 as Hunter will be enshrined with five other sports greats from Mississippi.

At Murrah High School in Jackson, Miss., Hunter won two state championships for the Mustangs. He was coached by legendary coach Orsmond Jordan and played with James Robinson, who was Mississippi Mr. Basketball in 1993 and went on to play college basketball at the University of Alabama.

Originally, Hunter went to Alcorn State University and was coached by another legendary coach Davey Whitney. He averaged 6.2 points, 3.7 assists, 2.5 rebounds and 1.4 steals per game as he was named SWAC Freshman of the Year.

A coaching change led to Hunter transferring to Jackson State University. It was at JSU that Hunter turned into a star on the court. After sitting out a season due to transfer rules, he averaged 20.9 points, 3.5 assists, 3.3 rebounds and 2.3 steals.

As a junior, Hunter improved his game over his previous season. His per game went up as he averaged 24.8 points per game. He averaged 4.3 assists, 3.4 rebounds and 2.1 steals per game.

Hunter was named SWAC Player of the Year his senior year and even helped the Tigers upset the University of Connecticut in the National Invitational Tournament. In his final season, Hunter averaged 26.7 points, 3.4 assists, 3.4 rebounds and 2.8 steals.

In the 1993 NBA Draft, the Detroit Pistons selected Hunter with the 10th overall pick in the first round. He was drafted higher than high school teammate Robinson, who ended up being drafted 21st overall in the first round by the Portland Trail Blazers.

Hunter would end up playing 17 years in the NBA. He spent the majority of his career with the Pistons. He would play with the Milwaukee Bucks, Los Angeles Lakers, Toronto Raptors and the Chicago Bulls.

During his NBA career, Hunter would be a part of two NBA championship teams. He won his first title with the Lakers in the 2001-2002 season and returned to Detroit to win his second title in the 2003-2004 season.

After his playing career Hunter began his coaching career with the Phoenix Suns. He would be named interim coach in the 2012-2013 season as he coached the team’s last 41 games.