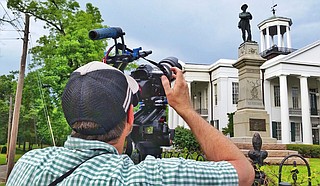 “Dear Johnny Reb” addresses the history and effects of Confederate statues in regard to Mississippi. Photo courtesy Philip Scarborough

In his recent short film, "Dear Johnny Reb," Jacksonian Philip Scarborough and a group of native Mississippians lament the damage that these statues have wrought through their immobility, and the film celebrates Mississippi history while indicting its darkest moments.

When he was 3 years old, the Jackson-born Scarborough and his family moved to Dothan, Ala., where his interest in filmmaking developed during his teenage years. After studying film at the University of Southern Mississippi, Scarborough returned to Jackson and began working in the film industry, eventually co-founding Spot On Productions with Tom Beck in 2011—a company that produces commercials, documentaries and corporate videos.

You start the video with the Confederate statue in Jackson. What's the significance of that for you, as a native?

I've lived in Jackson longer now than I lived anywhere else, and I was born here, at St Dominic's. I thought it was appropriate to start in Jackson, and it's also the Capitol.

Your video notes that there are around 100 Confederate monuments in Mississippi. How many monuments appear in the video, and how did you choose the ones that appeared?

There are 42 in the film, and according to my research, which I did mainly with the Mississippi Department of Archives and History and the internet, there are over 150 memorials of some kind to the confederacy (in Mississippi). That's counting the ones in the Vicksburg Military Park, which is where they should be.

When I filmed, I thought I did all of them. There were two I didn't know about, which bugs me, but those two were put up at the same time, by the same people, for the same reasons. So, there's a continuity that connects the statues. I also wanted to keep it short, and I didn't want it to be overwhelming. If I had done every statue, I would still be filming. Getting people to be in it was not easy. 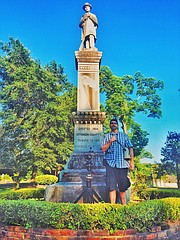 Really? What was difficult about the recruitment process?

Only a third of the people I asked agreed to be in it. Most people said they agreed with the idea, but they said they couldn't be in it because they worked for the state or for the government. They were—I guess—scared. I don't completely blame them; they didn't know how the film would look in the end. I think they were afraid of the repercussions and the blow back from the film—which there hasn't been any.

Everybody who is in it are friends of friends and family friends, because it was just word-of-mouth, trying to get people to be in it. I tried to get a person from every town, but that was kind of impossible. Everyone (who did end up in the video) is a Mississippi resident. That was important to me—that they agree with the premise of the film.

Tell me about the writing of the letter that's read to the statues throughout the film.

I wrote it, but I was working on another film—which I'm still working on—which is about Mississippi history. Right when the Civil Rights Museum opened (in Jackson), I started going because I was having a problem finding research materials on Mississippi civil-rights history, so the museum was a dream come true. There's so much information there. I took a pencil and pad after the first time I went because it was overload.

So I went a dozen different times, and I did a section at a time. I wrote words that I saw and tried to trace the chronological story of Mississippi—not just civil-rights history, but the history of the whole state. The idea of me talking to the statues was an old idea of mine—for someone to notice the statue and start talking to it.

I took all my notes from the museum, and I wrote that letter. Everything in it came from the Civil Rights Museum. I'm a descendant of at least five Confederate soldiers, and I wrote a letter to them, to their ghosts, to their effect on me. It's still a literal letter to these Confederate soldiers: You did what you thought was right at the time, but it's over. Go home. I didn't want to be disrespectful to people's ancestors, but still—they fought to maintain the slave economy, so I wanted to be firm. It's almost like the statues are on trial.

From that letter, “You are a traitor and un-American” was the only line not delivered in English. What’s the significance of that?

I wanted another language (in the video) because not all Americans speak English. I wanted a friend of mine from the Choctaw tribe to say, "That's just the tip of the iceberg" in Choctaw, but there's no Choctaw word for iceberg. We tried to figure out a substitution, but there wasn't one.

Mostly, I just wanted to be inclusive. I wanted it to represent modern Mississippi.

The letter goes on to say, “All of this has become your heritage.” How do we separate Johnny Reb’s heritage from our own as Mississippians, or do we?

That line is making reference to people who defend the Confederacy by saying, "It's heritage, not hate." We need to celebrate the African American heritage in Mississippi more because they have made Mississippi what it is, as far as the blues and the food culture. All the positive things people think of when they think of Mississippi, they think of that culture. I think our new flag should have B.B. King on it, myself. (Laughs)

The number of descendants of slaves in Mississippi is humongous, and we need to recognize it. You can't erase the past, and we can still look at the Old South, but you've got to have context. We don't need to tear the statues down with a mob, but we need to talk about it. I personally think they should take all of them down, but if they don't take (them) down, they need to have a plaque for context.

People go to courthouses to seek justice, and (sentinels) don't belong on a courthouse lawn. These men actively fought against the Union. Some people don't know what they don't know, and (talking about it) would help start the process because it would help people like that see how other southerners see the statues, who are just as much Mississippians as they are. Our heritage is not a fuzzy, "Gone with the Wind" heritage. There should be memorials to the horrors of slavery and to the descendants of slaves. (Mississippi was) ground zero for slavery, so we should have the biggest one. I maybe should not be the person (to instigate the change), but maybe someone who sees the film will make that change.

What was the inspiration for the original score?

A friend of mine, a musician from Jackson who spends a lot of time in Oxford, Cole Furlough, (composed the score). My friend Alex Warren introduced us, since I wanted a Mississippi composer to compose the music and record it.

I wanted it to be orchestral—mainly violins and cellos. It was based on Vivaldi's "The Four Seasons" and "Violin Phase" by Steve Reich. I let Cole hear that, and he had some other ideas.

He got a member of the Mississippi Symphony Orchestra to play (his composition). I got teary-eyed when he first played it because it was the perfect piece. I love classical music and real instruments. I don't like using electronic music for my films.

Watch "Dear Johnny Reb" during the Crossroads Film Festival, which will be virtual this year and take place from Nov. 12 to Dec. 15. You can buy tickets now at crossroadsfilmfestival.eventive.org/welcome.