EDITOR'S NOTE: The Joy and Pain of Fighting for U.S. Democracy 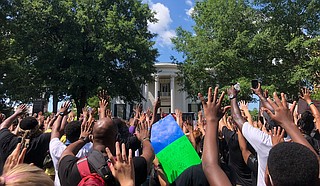 This year has seen deep pain, but there is much joy is seeing people come together for freedom for all and a democracy that doesn’t pick and choose. Photo courtesy Julian Mills

The scenes were joyful, far from the "civil unrest," "riots" and "looting" that too many of our leaders, especially in Mississippi, have managed to call the remarkable display of public solidarity this year against continuing and embedded systemic racism—yes, it's real—and violent policing that has often treated Black and Brown people like animals. Yes, sometimes white ones, too—but not nearly as often or as systemically.

But this past weekend, when the presidential race was finally called due to both electoral votes and real-people votes mounting against incumbent wannabe dictator Donald Trump, people danced and rang church bells across the world. My favorite were the celebrants at the Los Angeles gas station we saw on Twitter, dancing with abandon to Mariah Carey's "All I Want for Christmas."

So many things are true about last week's dethroning of a horrific, callous, brutal president. Those truths transcended blind political-party devotion into an effort by intelligent Americans who think for themselves beyond party to rid the nation of a man who likely would fully destroy our democracy with another four years—hell, with another four months.

Black women, especially, were the real heroes of this ousting, but so were the minority of white Republicans who dared look clearly at the emperor and acknowledge that he is stark naked of any real devotion to democracy and decency.

(I apologize for creating that image.)

For me, that relief was palpable and physical but not partisan. By Sunday, I could feel pent-up stress releasing from my forehead and my shoulders, and I was more tired mentally than I'd felt since the aftermath of surgeries in recent years.

Our nation is suffering from PTSD, no doubt. So many of us wake up and look at our phones with fear of what deplorable actions Trump has taken overnight, or what dehumanizing, loathsome insult he's lodged at someone who might disagree with him—always more despicable if a woman and/or person of color, of course.

Trump Should Be Removed from Office 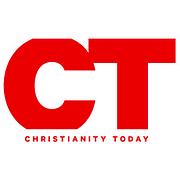 But here's the thing. Donald Trump is just one man. The real threat is the terrifying number of Americans who dote on him no matter what he does. His supporters are often described as a cult, and it's hard to disagree with that much of the time. But like with any cult, he doesn't actually care about them. He cares about himself and absolute power. This is as obvious as blood is red.

Still like many abuse victims, many keep going back, believing the lies he tells to woo them, the way he makes their unresolved prejudices great again, buying that if they support him long enough, the whole nation will be forced to think like they do. They don't stop to think what will have to happen to all those who disagree with him and them—like those young people dancing joyously in the street to a Christmas song, who could be their children or grandchildren. It's like being in denial about the severity and science of COVID-19 or climate change as they both endanger all of our futures.

Live for the day! Damn it all! MAGA!

Now, of course, we see Trump's minions—I refuse to call them Republicans, or Christians—marching out by demand to help him attempt a coup against the duly elected new president.This would be the end of U.S. democracy if they manage to pull it off, but they don't care. Somehow, they think following this man around like ravenous zombies will get them into some mean version of heaven, or at least keep their massive tax breaks if they're rich. Or, as it were, to keep white people in power.

And please don't try to tell me that a lily-white party that panders to white supremacists is anything but racist.

Donald Trump’s Most Vicious Lie, Yet? 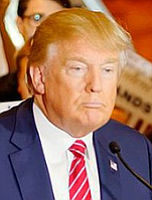 Trump is only the latest politician to spread vicious lies, fear about people of color.

This parade of sycophants even include Lynn Fitch, the attorney general of Mississippi, who is joining other obedient attorneys general in various states to try to steal Pennsylvania's electoral votes for Trump, saying that state shouldn't count votes that came in after Election Day even as we're still counting them in Mississippi. Seriously, General Fitch, this is the rusty sword you want to leap on for posterity? I assure you that your descendants will be ashamed to see you in the history books for playing a handmaid against democracy.

Another nearby state representative, former farmer Price Wallace, did acknowledge the Biden-Harris win, tweeting: "We need to succeed [sic] from the union and from our own country." We see you, Rep. Wallace. We see you.

All of this is painful to watch, but it cannot steal my joy over a record number of people transcending partisanship to vote to replace a tyrant aching to blow up democracy. But it is a moment, or maybe the moment, for our nation—a test to see if we mean all those evident truths we all learned to recite in school enough to do what it takes to maintain the right to even pursue liberty in this nation, which I love dearly, not because of what it is or has been, but because of its possibility.

In fact, Todd and I have been talking about whether to replace the defiant "Stennis flag" we started flying a few years back with the new state flag—he doesn't dig the yellow, and the magnolia, bless its heart, makes me think of Scarlett O'Hara posing on her veranda, and not fondly, but we're happy it's now official.

But on Sunday, as we set out on our walk, I told him I thought we should kick it old-school and replace our flag with the American stars and stripes. Let's hope Old Glory doesn't soon become as dated as our Stennis banner and the 1890 racist flag. It won't if we all fight for democracy like there's no tomorrow without it.

Because there's really not.