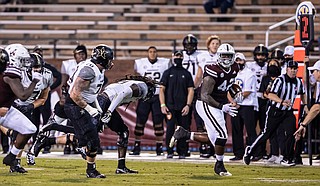 Mississippi State University entered their game against Vanderbilt University looking for a second win of the season. The Bulldogs barely had the required number of players to play the game.

The Bulldogs’ defense stepped up in a big way by forcing Vanderbilt into five turnovers. MSU forced the Commodores into two fumbles and three interceptions.

One of the biggest defensive stands came from Marquis Spencer in the fourth quarter. The senior defensive end made back-to-back big plays when the Bulldogs needed it most.

MSU raced out to a 17-0 lead, and Vanderbilt battled back to cut the Bulldogs lead to 17-14. The Commodores had just completed a long pass to reach the Bulldogs 27 yard line and were threatening to tie or take the lead.

On the next play after the big pass play, Spencer tackled the Vanderbilt running back for a one-yard loss. Vanderbilt quarterback Ken Seals dropped back to pass and Spencer made this next second straight big play.

The Greenwood, Miss., native picked off Seals for his first career interception. He returned the ball to the Vanderbilt 43 yard line to turn back the Commodores' threat.

The SEC honored Spencer as Defensive Lineman of the Week for his efforts against the Commodores. Spencer is the first Bulldog to receive the award since both Jeffery Simmons and Montez Sweat earned the honor in the 2018 season.

Spencer and the Bulldogs won’t play this weekend against Auburn University. MSU was forced to postpone the game due to positive tests and contact tracing. The Bulldogs next will take the field until Nov. 21 when they face the University of Georgia.