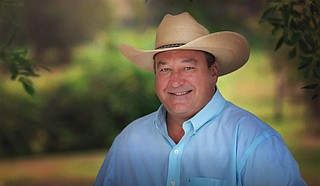 Rep. Price Wallace of Mendenhall made the comment Saturday on Twitter in response to former state Rep. Robert Foster, who unsuccessfully sought the Republican nomination for governor in 2019.

After news organizations reported Biden had secured enough electoral votes to win the presidency, Foster tweeted that Democrats would “riot and burn their own cities to the ground” if the presidential election does not end in their favor.

“We need to succeed from the union and form our own country,” Wallace wrote in response, misspelling “secede.”

Mississippi was among the Southern states that tried to secede from the United States before and during the Civil War. The Mississippi secession declaration, adopted by state lawmakers in January 1861, stated: “Our position is thoroughly identified with the institution of slavery — the greatest material interest of the world.”

Wallace, a farmer, won a special election to the Republican-controlled Mississippi House in 2018 and was reelected in 2019.

Wallace wrote Wednesday on Twitter: “I truly love the USA and Mississippi and would never support any idea of seceding from the union. I am extremely sorry for my comment it was inappropriate and in no way represents the will of my constituents or myself. I humbly ask for forgiveness for my poor lack of judgment.”

The Mississippi Free Press was the first news organization to report on Wallace's original tweet. That tweet had been deleted by Wednesday, although The Associated Press had a screenshot of it.

After the AP left him a phone message seeking comment Wednesday, Price replied in a text message: “I am going to refer you to my apology message on Twitter and that's all I'm saying.”