Vaccine May Be Available for Some in Mississippi Next Month 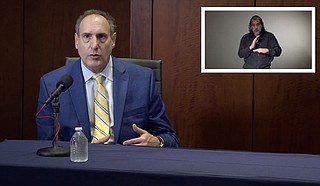 State epidemiologist Dr. Paul Byers said Mississippi has been tentatively approved to receive an initial round of 183,000 doses of the vaccine developed by Pfizer and partner BioNTech, which officials are hoping to see delivered by mid-December. Photo courtesy State of Mississippi

A coronavirus vaccine could be available to health care workers and first responders in Mississippi as soon as next month, the state's top health officials said Thursday.

State epidemiologist Dr. Paul Byers said Mississippi has been tentatively approved to receive an initial round of 183,000 doses of the vaccine developed by Pfizer and partner BioNTech, which officials are hoping to see delivered by mid-December.

Supplies are limited, so those who are the most high-risk will get the vaccine first, Byers said.

“We need to make we get them protected,” Byers said of the state's health care workers, during a virtual news conference. “Those are the individuals who are taking care of the COVID-19 patients in the hospital, in the clinical setting. That's going to be the first push.”

Residents who have health conditions or are over the age of 65 will be next in line to receive the vaccine. It will likely be a period of months before it is more broadly available to the general public and even longer until a vaccine is available for children. There are no clinical trials currently underway in the U.S. to examine the effectiveness of the vaccine in individuals under 18, according to the Association of American Medical Colleges.

The announcement about a vaccine comes as Mississippi is experiencing a surge of new confirmed coronavirus cases and hospitalizations that rival numbers seen during the peak in the state over the summer. In the last couple of weeks there have been more than 10,000 new cases in Mississippi and 150 deaths, an “astounding” number, Byers said.

Byers and state health officer Dr. Thomas Dobbs said the vaccine shipment is pending federal approval, but that the news they've received so far about trials on the new vaccine is encouraging.

Pfizer and its German partner BioNTech have enrolled nearly 44,000 people in final testing of their vaccine. Every vaccine study is overseen by an independent “data and safety monitoring board,” or DSMB. These boards include scientists and statisticians who have no ties to the vaccine makers.

Early and incomplete test results indicate the vaccine against COVID-19 may be 90% effective, officials said Monday.

Pfizer is on track to apply later this month for emergency-use approval from the U.S. Food and Drug Administration, once it has the necessary safety information in hand.

“Based on the initial information we have, I feel really good about it,” Dobbs said Thursday.

Dobbs said the department of health is already working with doctors and pharmacists to plan the rollout of the vaccine, including where it will be stored. The two-part vaccine must be kept in -94 degrees Fahrenheit (-70 Celsius) conditions, presenting a challenge for health officials.

Dobbs said Mississippi has received “minimal” financial support from the federal government to aid in the disbursement of the vaccine. He said the state will need to continue to rely on the National Guard, whose help has been vital in operating Mississippi's testing sites.

Dobbs said even when a vaccine becomes available, people will still need to wear masks and social distance. Mississippi is now facing a “severe surge" of new coronavirus cases, he said. In DeSoto County, there were almost as many new cases as three counties in the Jackson metro area combined during the last two weeks.

Republican Gov. Tate Reeves issued a mask mandate in DeSoto and 14 other counties in Mississippi that have seen the fastest increases in cases.

Dobbs said they are starting to see “extreme stress” in the state's health care system. There were no ICU beds available in Jackson Thursday, and a very limited amount available in other parts of the state.

The state health department said Thursday that Mississippi, with a population of about 3 million, has reported more than 130,600 virus cases and at least 3,514 deaths from COVID-19 as of Wednesday evening. That’s an increase of 1,271 cases of 17 deaths from the day before. The department said 16 people died between Nov. 5 and Nov. 11 with information from death certificates arriving later.

The true number of virus infections is thought to be far higher because many people have not been tested and studies suggest people can infect others even when they don’t feel sick. The virus causes mild or moderate symptoms for most but can be more severe or fatal for some, especially older adults and those with underlying health conditions.