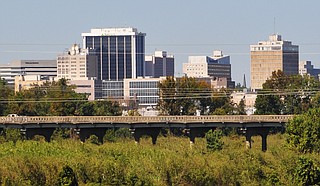 The lawsuit is against SSM Properties, which owns Oak Manor Apartments, Pearl Manor Apartments and 468 Place Townhomes, all in the Jackson suburb of Pearl. File Photo by Trip Burns

JACKSON, Miss. (AP) — The U.S. Department of Justice on Thursday sued the owners and manager of three apartment complexes in Mississippi, saying they violated the Fair Housing Act by discriminating against Black potential renters.

It is also against the married couple who runs the company, Steven Maulding Sr. and Sheila Maulding, both of Pearl; and a manager for the three complexes, James Roe of Pearl.

Roe repeatedly steered white renters to Pearl Manor and away from Oak Manor, and he failed to tell Black renters about apartments available at Pearl Manor or 468 Place Townhomes, according to the lawsuit filed in U.S. District Court in Jackson.

People from the Louisiana Fair Housing Action Center conducted four tests between November 2016 and November 2017 to evaluate whether the three apartment complexes in Mississippi were complying with the Fair Housing Act, according to the lawsuit. It said that in one instance, Roe told a Black woman that he could not rent an apartment to her at Pearl Manor because people there would think he had let the “zoo” out.

The Associated Press left phone messages for Roe and the Mauldings at the apartment complexes Thursday evening. They did not immediately call back.

Eric Dreiband, assistant attorney general for the Justice Department’s Civil Rights Division, said in a news release that the Fair Housing Act is designed to ensure landlords cannot prevent people from living where they want based on their “race, color, or other protected characteristics.”

“All Americans should be free to live anywhere in the United States without regard to the color of their skin,” Dreiband said. “No one’s housing choices should be limited because of race or color or by more subtle differences in the way home-seekers are treated when they ask about available properties."

The lawsuit said the Mauldings are responsible for Roe's behavior because he is their employee.

“Treating people differently in housing based on the color of their skin is not only morally and ethically reprehensible and incompatible with American principles, but against federal law,” Mike Hurst, U.S. attorney for the Southern District of Mississippi, said in the news release.

The lawsuit asks a judge to find that the defendants violated the Fair Housing Act and to issue an order preventing such conduct in the future. It also seeks civil penalties against the defendants and unspecified compensation for victims.