Fighting Hunger One Meal at a Time, From a Distance 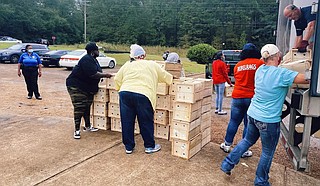 It's Friday evening and a crowd of people begins to gather at Smith Park. A car pulls slowly up the drive and parks. The sedan's trunk opens as several men move toward the vehicle to begin unloading the small brown boxes and cases of water. The crowd forms a line as two of the men distribute the 400 boxes unloaded from the vehicle's trunk one-by-one.

Another person hands each recipient a bottle of water. Once the trunk is empty, one man closes it and taps the car twice. With a smile and a wave, the driver pulls off while the crowd settles in to enjoy the meal they've just been given.

The scene is the same each Friday night when Bilal Qizibash delivers the weekly sandwich boxes to the homeless. The program "R U Hungry?" recently celebrated its seven-year anniversary. However, COVID has caused some changes. Safety concerns have eliminated the use of volunteers, leaving Qizibash as the sole deliverer. The boxes now contain  individually wrapped and sealed hot sandwiches. However, Qizibash's dedication to continuing the work caused those he serves to step up for his safety.

With the pandemic creating new food needs, Qizibash has also been helping guide other programs in the metro. From March to October, his "Draw a Smile Foundation" partnered with the City of Jackson to provide emergency meals to residents through a program from the USDA. When a glitch caused those deliveries to stop, Qizibash said local grocery stores banded together to help fill the need.

The group is also working in partnership with the Boys and Girls Club and Dole to provide meals. The hot meals, which are professionally prepared by chefs Nick and Regina Wallace, are distributed at the West Capitol Boys and Girls Club where families can drive through to pick up the individually packaged and sealed containers each Saturday. The partnership is now also providing food boxes of produce and meat.

Qizibash notes his organization is not a charity, but a movement toward systemic change. "'R U Hungry' is essentially a band-aid," said Qizibash. "It is essential. It is critical. We do have to feed people that are hungry, but we do need to put in more sustainable solutions. We are in the business of putting ourselves out of business."

Find more information on R U Hungry at facebook.com/hungryur. Bilal Qizibash is the co-founder and CEO of EasyKale, which manufactures shaker bottles of the dehydrated and powdered namesake vegetable. Visit easykale.com to learn more.