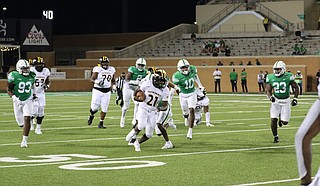 USM’s record since has remained shaky, as the Golden Eagles fell 31-30 to Louisiana Tech University in a heart-breaker. Then the bottom fell out as Tulane University took the Golden Eagles behind the woodshed. The 42-point defeat became the low point of the season as USM got off to an 0-3 start.

Southern Miss quarterback Jack Abraham is fourth in the nation in passing yards with 1,112 yards. The problem, however, is that the running game has not been adding much to the offense.

USM as a team rushed for 95 yards against USA, 129 yards against Louisiana Tech and 70 yards against Tulane. The Golden Eagles needed to balance their offensive attack, and that happened against the University of North Texas.

Against the Mean Green, USM rushed for 202 yards as a team with freshman running back Frank Gore, Jr. leading the way with 130 yards. It has been rough for the Miami, Fla., native as he has struggled to get going until that point.

Gore Jr is the son of NFL running back Frank Gore who is still playing in the NFL in his 16th season. While his father played college football at the University of Miami, his son will try to make his mark for the Golden Eagles.

Against Tulane, Gore Jr. had his worst game as a college football player with just seven yards on five carries. The running back hadn’t even scored his first college touchdown three games into the season.

The younger Gore did get his first touchdown against the Mean Green as he scored on an 11-yard run to put USM 14-3. The Golden Eagles didn’t look back as they went on to win 41-31 to get their first victory of the season.

While at Killian High School in Miami, Fla., Gore played quarterback as he threw for 213 yards on 17 of 22 passing with two touchdowns and one interception. He rushed for 1,111 yards with 13 touchdowns. He caught nine passes for 66 yards and a touchdown.

Gore ended his senior season with five games over 100 yards rushing as he averaged 92.6 yards per game and 9.8 yards per carry. MaxPreps voted him third on their Under The Radar Player among high school players.

Southern Miss and Gore look to start a winning streak as the Golden Eagles host Florida Atlantic University this Saturday, Oct. 10. The kickoff is set to take place at 3 p.m. as long as COVID-19 or other concerns do not postpone the game.