Seth Power: Advocating for Mississippi and Celebrating Milestones in Life and Music 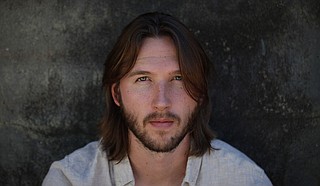 Seth Power will perform an outdoor show on at The District at Eastover on Thursday, Oct. 22. Photo courtesy Seth Power

His foot held in place against the accelerator of his white Toyota Tacoma, Seth Power recalled the words that Nashville Songwriters Hall of Famer Walt Aldridge had told him earlier that day after listening to a guitar melody Power had been working on: "That sounds like a wedding song."

Along the course of the roughly four-hour drive from Muscle Shoals, Ala., to his Brandon, Miss., home, the musician recorded himself singing song lyrics to accompany the melody. In six days he was marrying the love of his life, Collette Usry, and he would be ready. Completing the song the night before the ceremony, Power surprised his wife by performing "I Do" just after their first dance, marking June 15, 2019, as the single's unofficial debut.

Fast-forwarding to September of this year, Train Tracks—an hour-long segment on SiriusXM's The Pulse—showcased "I Do," Power's first song to play on live radio in the United States. In the weeks since then, SiriusXM and other stations have played the track multiple times.

In the last year, Seth Power has released two albums, and multiple radio stations have played his single, “I Do.” Photo courtesy Seth Power

"Having 'I Do' be picked up for the radio is probably the most memorable accomplishment I've ever had, probably period," Power says, emphasizing how meaningful it is for this song that holds so much significance for him and his wife to be heard by so many new listeners.

Launching a Career Based on Convictions

While Power feels blessed by the feats he has been able to accomplish as a musician thus far, he remembers a time during his early days as a recording artist when choosing to write a song about a controversial issue led some people to believe he had sabotaged his own career.

Shortly after graduating from Mississippi State University with a bachelor's degree in business in 2015, Power began working with a number of people who were deeply affected by the underlying symbolism surrounding the former Mississippi state flag that bore Confederate imagery, and who were passionate about their positions that it needed replaced.

"As a whole, it was not a subject I had put much thought into, but when I was sitting down and talking to these people who were natives to this state, had grown up in this state and had several family generations that came from this state, they told me about how it made them feel and how it seemed like a symbol of oppression," Power says.

"It was a very eye-opening experience for me."

The topic continued to weigh on his mind when his friend David Horton, a Black hip-hop artist who goes by D. Horton, sent him a tack he received from a producer in Atlanta. Listening to it made Power think about the subject of the flag again, so he suggested he and Horton collaborate on a song that deconstructed these issues.

Agreeing, Horton began writing rap verses while Power independently wrote the chorus. When the pieces were brought together in the studio, they meshed so seamlessly that the two recorded the entire song in under four hours. "Free" released in fall 2015, and a music video  depicting the two artists performing the song while wearing "#ChangeMissFlag" T-shirts shortly followed.

The song's opening invokes imagery surrounding the systemic violence perpetrated by law enforcement against Black Americans across the nation, but "Free" also contains the message that people hold the power to take action in the present to change the future for the better.

"I can picture the blood of my brother on the pavement. The world is crying out for you, and I am gonna save it. Yeah, we are the future, and that is the past. In the present we can change it," the chorus starts. It continues: "And the road that we've chosen has been so long and dangerous. And the face of my father is filled with grief and anguish. Sometimes we forget, oh, sometimes we forget that the world is what we make it."

News stations picked up the video, but many conservatives responded negatively to the implications of the song, saying, "If you don't like it, then leave," Power recalls.

"David and I would push back and say, 'We live here. We're from here. We don't want to leave. We want to help improve (the state). We want to bring awareness and try to communicate a feeling that people legitimately have. We're trying to recreate the human experience with music,'" Power says. "'That's what we're doing. That's what we're called to do. So you can have whatever opinion you want, but no, we're not going to leave. We are going to stay, and we are going to talk about these things because we want to and because we have the right to do that.'"

Five years later, Power and Horton were two of many Mississippians who celebrated when the legislators voted to change the state flag back in June.

"I knew that it was kind of an ill- advised way to start a career, by starting with controversy, but it was a big moment for me as an artist where I (decided) that I'm going to talk about the things I'm passionate about," Power says. "I'm not going to avoid saying things that I want to say just because I'm trying to make a living in the world of entertainment. I don't feel like I should be muzzled just because people think my job is to simply make music."

Developing as an Artist and Responding to COVID-19

Following the release of "Free," Power released "Make it Mine," his first single as a solo artist, in 2015. In 2017, he released a six-track EP titled "Magnolia Soul," which he recorded at Blue Sky Studios in Jackson and co-produced alongside Jonathan Le Sueur. The album infuses elements of soul, rock, blues and pop, and features a collaboration with another local music artist, Micah Smith of Empty Atlas.

In 2018, the Brandon High School graduate open-sourced the music he had created up to that time, which allowed anyone to freely use his music without having to worry about copyright issues as long as they credited him for the songs. This decision, Power says, generated a lot of growth for him as an artist, as his songs started playing on radio stations in Poland and Switzerland and were collectively played 3 million times across multiple YouTube videos.

The momentum that built from his music reaching a larger audience motivated Power to spend the next year developing songs for his first full-length album,  "Souvenir," which he released on Jan. 10, 2020, holding an album-release party at Duling Hall, which sold about 170 tickets. Power worked with two local producers for "Souvenir," Micah Smith and Shell Ens, who owns Crown Studios in Fondren.

Power describes the 14-track album as the culmination of his experiences with stepping out into the world and discovering who he is as a person and as an artist.

"These songs are the most honest representation that I can give of that period of my life," he told the Jackson Free Press in January.

After the album's launch, Power hit the road for his first regional mini-tour, making stops in Nashville and Knoxville, Tenn.; Asheville, N.C.; and back in Mississippi in Tupelo and Starkville before returning to Jackson for a closing show at Hal and Mal's on Jan. 24. Power planned to tour college campuses further into the year as part of a deal organized through the National Association for College Activities, but the onset of the COVID-pandemic across the nation forced those plans to a halt.

"There's just such a wide array of strategies that are being used to navigate this pandemic that the world of live music is a little hazy right now, a little unclear," Power says. "We're really hopeful for 2021 that we'll be able to get back on the road and hit these college shows. That is the plan, and that is the strategy, but obviously we just don't know how that's going to play out."

Not wanting to stagnate, Power delved deeper into producing more music, releasing an EP titled "Souvenir (Acoustic)" over the summer that features acoustic remixes of six tracks from the original album, with two bonus mixes.

To keep connected with fans, the 28-year-old has increased his social-media presence, joining TikTok and live-streaming on Instagram. Recently, Power held a dual stream with Jaymes Brass, a music artist from Arkansas whom he had never met. The two got to know each other during the live-stream by exchanging stories behind their songs and performing them so that the other could give feedback.

"I was a little nervous about it because ... you never really know if your personalities are going to jive or not. But it actually made for a really cool interaction," Power says.

In addition to "I Do" circulating on the radio, Power has been working with local videographer J.B. Lawrence on another new development, a documentary series on the makings of "Souvenir," which is set to release on Power's YouTube channel later this year. Each episode of the four-part series lasts between five and seven minutes and features the musician detailing his artistic journey.

"It's called 'Souvenir: The Last Seven Years' because it's about how the last seven years of my life have shaped me and formed me into the person I am to write this album and pursue this path," Power says. "We're going to dive into how we made the album, show scenes from being in the studio, show footage from the tour. The last part is going to put a bow on everything and talk about the future and how I plan to evolve and progress as an artist."

Specifically, Power—an advocate for Mississippi—will offer an in-depth overview of how his experiences growing up in this state influenced him and created the body of work he has been incorporating into his craft.

"I've never shied away from the fact that I am a Mississippian. When I go places, I am proud to be from here, and I promote us. I promote the good things about us, and I think it's important to do that," Power says.

"It's something that I didn't do much when I was younger because I was insecure about some of the more negative parts of our image, but as I've gotten older, I've realized that the positives outweigh the negatives and that this is a place to be proud of, especially our musical and artistic heritage. It's really profound."

Power and his wife, Collette, are expecting their first child in the next two weeks. Before their child is born and they become swept up in the transition of  parenthood, Power has one live show scheduled for Thursday, Oct. 22, at The District at Eastover (1250 Eastover Drive) on the green space. Having the show outdoors so that people can social distance more easily was a must for the musician.

"I've had some offers to play some inside shows, but a lot of people who come to our shows are older folks who just really love live music, but who are more high-risk. So I said no to all those shows because I feel uncomfortable promoting inside shows right now with the current environment," Power says.

The show will take place from 6 p.m. to 8 p.m. and will include an acoustic set of both originals and covers.

For more information on Seth Power, visit sethpowermusic.com. Listen to his music on Spotify, iTunes or other music-streaming services.