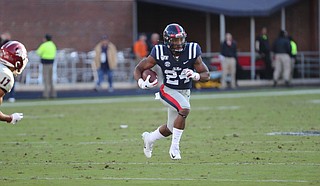 Offense has not been a problem since the University of Mississippi jumped on the Lane Train. The Rebels offense has been explosive to start the 2020 season.

Mississippi is third in the SEC in scoring with 42.33 points per game. The Rebels are first in the conference in total yards per game with 573.

Nationally, the Rebels are 11th in points scored and second in yards per game. Only the University of Central Florida is putting up more yards per game with 582.3.

Defensively, UM is not doing as well as its offensive counterpart. The Rebels are giving up 641.3 yards per game and 51.7 points per game. Both are the most in college football.

While the offense has been putting up huge numbers all season long, not every player has gotten off to a fast start. It was not until the Rebels played the University of Alabama that the Rebels’ offense went to another level.

Against the Crimson Tide, Conner enjoyed his best game as a Rebel. He gashed Alabama for 128 yards on 21 carries with two touchdowns and one catch for 15 yards.

The Rebels made history as Conner and fellow running back Jerrion Ealy both rushed for over 100 yards. Never has a Nick Saban coached Alabama team given up 100-yards rushing to two running backs.

Conner played in all 12 games in the 2019 season as he rushed for 512 yards on 81 carries with five touchdowns. In three games he has 179 yards with four touchdowns this season. Even playing just 10 games and barring injury, it looks like he should surpass his freshman season.

Conner and Ealy could give the Rebels a dangerous one-two punch at running back. The Alabama game might have been a coming out party for Conner as he wowed on the national stage.

The 1-2 Rebels look to even their record on the road this Saturday against a highly improved Arkansas team. The game is scheduled to kickoff at 2:30 p.m. on the SEC Network.

That could change with the current pandemic as Saban tested positive for the virus today and the University of Florida against Louisiana State University game being postponed. Head coach Lane Kiffin said the Rebels are dealing with COVID issues as well this week.