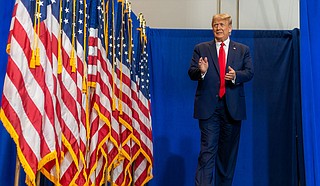 President Donald Trump's campaign is telling a Mississippi group to stop saying that Trump supports a ballot measure that would legalize medical marijuana in the state. Official White House Photo by Shealah Craighead

JACKSON, Miss. (AP) — President Donald Trump's campaign is telling a Mississippi group to stop saying that Trump supports a ballot measure that would legalize medical marijuana in the state.

Mississippians for Compassionate Care is a group promoting Initiative 65. It paid for a letter signed by several prominent Republicans, and the outside of the envelope said: “Join President Trump and 3 out of 4 Mississippi Republicans who support medical marijuana.”

The letter said: “President Trump Supports Medical Marijuana ... and allowing states to decide on that issue."

“This unauthorized use of the President's name in support of your group's cause is unfair to Mississippi voters who may be led to vote ‘Yes’ on Initiative 65 on the false belief that President Trump supports the measure,” Glassner wrote. “Therefore, let us be clear about this: President Trump has never stated his support for passage of Initiative 65 or the legalization of medical marijuana in Mississippi.”

Initiative 65 would allow patients to use medical marijuana to treat debilitating conditions, as certified by physicians.

An alternative measure that is also on the Mississippi ballot, Initiative 65A, would allow patients with debilitating conditions to use medical marijuana. It says the state would create a program based on “sound medical principles.”

Jamie Grantham, communications director for Mississippians for Compassionate Care, said in a statement Tuesday that the group had accurately portrayed Trump's position on medical marijuana. She said that “politicians and bureaucrats" opposing Initiative 65 “clearly orchestrated this letter from the Trump campaign.”

“It’s just the latest example of the lengths to which they will go to prevent any form of medical marijuana in Mississippi,” Grantham said. “President Trump himself has said he supports medical marijuana and is letting the states decide.”

More than 100,000 registered voters petitioned to put Initiative 65 on the ballot. The alternative was put there by legislators. Sponsors of the original initiative say the alternative is intended to cause confusion and kill the original.

There’s a two-step process for voting on 65 and 65A. The ballot first instructs people to “Vote for approval of either, or against both.” It then says, “And for vote for one” — either 65 or 65A.

Secretary of State Michael Watson said that even if people vote against both initiatives on the first part, they can still vote for one of the proposals on the second part.