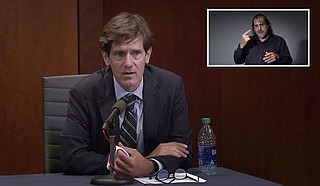 Gov. Tate Reeves struck a particularly confident tone at Tuesday’s COVID-19 presser, celebrating the state’s consistent decline in new coronavirus cases, even as schools open across the state. “Mississippi has truly turned a corner,” Reeves said, thanking Mississippians for their commitment to preventing the spread. “But we also know that with this virus, we cannot let our guard down,” the governor warned.

Yesterday also provided a brief respite from the daily death toll, though only due to a lag in reporting due to the Labor Day holiday. Today, the Mississippi State Department of Health announced 39 new deaths from complications of COVID-19, 12 derived from earlier fatalities in July and August. MSDH also reported 426 new cases of COVID-19, after typical weekend lows. The current seven-day rolling average of new cases is 491.

Mississippi’s present total of confirmed COVID-19 deaths is now 2,623, though Dobbs assured the public that the true number was much higher. “We know that this is likely an under-estimation of the total number of deaths, because we know our excess mortality … is around 3,300 people.” Excess mortality compares the year’s weekly deaths from all causes to previous averages. The U.S. has been in a period of “excess death” since March, when the virus’ spread reached critical mass.

That “excess death” is perfectly in sync with both the primary “waves” the U.S. has experienced: the first early in the year in the northeast, the second in late summer here in the south.

Dobbs warned that the primary outliers in Mississippi’s general improvement in COVID-19 numbers are its college towns, particularly Oxford and Starkville. “We saw that 62 counties were shrinking in the number of cases that they were having, (and that) 20 had increased,” Dobbs explained, “but we did see some specific outliers, especially in Lafayette County and Oktibbeha County.”

Earlier this week, the Daily Mississippian reported mass gatherings for fraternity and sorority bid parties on the University of Mississippi campus, the kind of large-scale in-person events that can reverse the positive trends in the state. Oxford is currently one of the top areas of per-capita spread in the U.S.

Photos posted on social media showed mass gatherings at many fraternity houses, with few in attendance wearing masks or face-coverings. Indoor, unmasked, long-term exposure is the perfect environment for the superspreading of COVID-19.

In Jackson, too, a large block party held off of Dixon Road on Labor Day drew the ire of the governor and the state health officer. “It really makes me angry,” Dobbs said, “how selfish it is right now … we're having people who are dying, schools want to stay in session, colleges want to stay open.”

“It is distressing to see people in our community gathering in ways that dramatically increase the risk of spreading COVID-19 to others,” Jackson Mayor Chokwe A. Lumumba said in a statement Tuesday in response to the party. “The event on Dixon Road was an unlawful one. It did not receive a permit from the City. It was in violation of the City and State’s 20/50 rule—that is a limit on inside gatherings to no more than 20 people and a limit on outside gatherings to no more than 50 people.”

Lumumba explained that the City was focused on “peaceful intervention” to reduce the spread of the virus.

Dobbs shared a grave warning to those who felt that a return to classes or slumping numbers meant an end to the threat. “Look at what happened in Spain and Israel, who thought that they had it licked, and now their case burdens are higher than the U.S.,” he said.