EDITOR'S NOTE: As You Vote, Recall the Blackjacks Hitting Mrs. Hamer’s Back 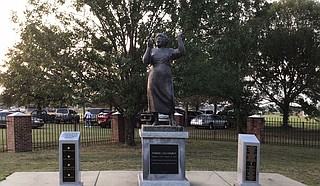 Fannie Lou Hamer was not “radicalized” into claiming her own American rights until she was 44. Then, she got a lot done fast. Today, her statue looks over her tribute-filled burial site in Ruleville, Miss., surrounded by an active park. Photo by Donna Ladd

Fannie Lou Hamer didn't know she had the right to vote until she was 44 years old. Born in Winona in 1917, she soon moved to Sunflower County with her family to work the E.W. Brandon plantation—she was in the fields helping earn a living at age 6. But she did manage to go to school through eighth grade.

She came up in a Mississippi where white leaders, including former Confederate generals immortalized as heroes, had worked diligently in the years before her birth to make sure that Black people could not enjoy the fruits of emancipation.

These white men—who have university buildings, public schools and whole damn Mississippi counties named after them—came together in 1890 to put vicious and totalitarian Jim Crow provisions into the state constitution that could block families like Mrs. Hamer's from taking full part in democracy, especially by voting, and to reverse any gains Black Mississippians had made during Reconstruction.

These men either participated in or supported the kinds of racial violence that would enforce their codification of racism into state law and helped erect Confederate statues and a state flag visible across the state to make sure nobody forgot who was boss.

That is, these white supremacists some still fetishize officially installed a fascist state for Black Mississippians in 1890 by codifying it into the state constitution. It wasn't surprising, really, that a Black woman who was 44 in 1962 would not know she had the right to vote—because she didn't have the ability to vote due to these laws and the violent mobs willing to enforce them.

Once she found out voting was her legal right that white people wouldn't allow her to exercise, she was "pissed off about it," as my partner Todd Stauffer phrased it so eloquently to me on a road trip in September to Ruleville. This is the town where she was living and sharecropping on W.D. Marlow's plantation when she found a way to show that she was "sick and tired of being sick and tired," to use her famous words.

By the end of 1962—I was 1 year old; this is not ancient history, folks—Hamer's public life changed when civil-rights workers arrived and found a woman who would soon lay her life on the line to help herself and her people exercise their right to vote and to full American democracy. Soon, she met up with Student Nonviolent Coordinating Committee members at Williams Chapel Church in Ruleville and volunteered to try to register to vote.

The next day, 17 people, including Hamer, drove in a schoolbus 26 miles to the Sunflower County Courthouse in Indianola to try to register on Aug. 31, 1962.

There, white men circled the courthouse to intimidate the would-be voters who were allowed to take the literacy tests, which were designed to block Black voters, but not allowed to register. A cop who pulled them over told them their bus was "too yellow" when asked why.

Inside the bus, many were afraid, but Mrs. Hamer started singing "This Little Light of Mine" to help calm them.

"I guess if I'd had any sense, I'd a been a little scared," she said later. "But what was the point of being scared? The only thing the whites could do was kill me, and it seemed like they'd been trying to do that a little bit at a time since I could remember."

By 1963, Mrs. Hamer was a SNCC field secretary. After attending a civil-rights training in Charleston, S.C., she was on a bus headed home when it stopped in her birth town of Winona at a cafe. Some activists were refused service. The police chief arrested them, as well as Hamer when she got off the bus to check on the situation.

In the Winona jail, officers gave loaded blackjacks to two Black prisoners and made them beat Mrs. Hamer almost to death as she lay face down on a bunk, with her dress pulled up over her head. She suffered permanent kidney damage and lost vision in one of her eyes due to the attack—which she would tell the nation about in detail a speech at the 1964 Democratic National Convention in Atlantic City, N.J. By then, she was a delegate of the Mississippi Freedom Democratic Party, which Mississippi Dixiecrats would not allow to be seated.

Of course, a white jury later acquitted the officers who orchestrated her beating.

But by then, Mrs. Hamer had already been quietly brutalized in one of the most horrific ways imaginable back in 1961 in Sunflower County when she had gone to the hospital to have a small tumor removed.

While she was unconscious, a white doctor sterilized Mrs. Hamer to take away her and Pap's reproductive choices.

She later called this act of eugenics her "Mississippi appendectomy," which was horrifically common across the U.S. in much of the 20th century to keep Black people and "feeble-minded" whites from reproducing. Nazi Germany had adopted the U.S. practice as part of its eugenics program that devolved into death chambers.

Todd and I were in Sunflower County, in fact, on that weekend retracing Mrs. Hamer's steps because I had immediately thought of her sterilization upon recent news of ICE facilities sterilizing undocumented women without their permission.

None of this inhumane treatment stopped Mrs. Hamer from working to build up her community and our state and help reverse systemic and structural racism that kept Black people from building wealth and white people being oppressors.

She and her husband "Pap" adopted two children, and the greater community was her family. Driving through Ruleville today, her influence is felt everywhere, and not just because her name is on so many signs. You must, in fact, visit her gravesite with her statue and adjacent to an active park. The memorial alone helps address a little of the vast inequity of so few memorials or naming tributes celebrating women in our state, especially Black women.

Before her 1977 death from breast cancer, Mrs. Hamer accomplished so much, but we all must know that her work is not done. As we approach Election Day teetering on the precipice of losing our democracy, think about those blackjacks striking this remarkable woman's back; a doctor taking away her dominion over her own body and choices; and Mr. Marlow firing and evicting her because she wanted to finally vote.

You have until Oct. 5 to register to vote now in Mississippi. Do it.

Donna and Todd's "Driving History" video about Mrs. Hamer is on his Youtube channel and at jacksonfreepress.com/hamer.