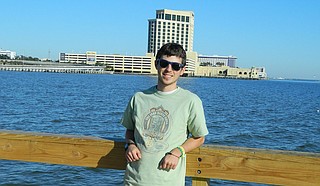 I'm originally from Hamilton, Mont., a small town on the far western side of the state, although I was born in Honolulu, as my dad was stationed at an Army base there. For the most part, I was raised in Hamilton and attended the University of Massachusetts Amherst before transferring to the University of Montana where I earned a bachelor's degree in history

I've always enjoyed writing as a hobby, whether it be short story or poetry. I also enjoy staying informed by reading local and national news. As a member of the community I would read the Jackson Free Press, and I noticed an advertisement for a freelance writer position, although I drove around west and north Jackson delivering copies prior to writing for the publication.

As a freelance writer I have freedom to choose the assignments I accept. At this point I have a general idea on the information needed to write an article describing a new business or person's biography, for example. Throughout the years, I have spoken to countless people, both in-person and over the phone, who have served as a reminder of our diverse city and taught me a thing or two about Mississippi.

In addition to writing, I enjoy watching movies (dramas in particular). My favorite is "The Birdcage," and I can quote most of it. Documentaries are often on a playlist, mainly history and true crime. Additionally, when on a nature trip, I'll pull out my sketch pad and illustrate the scene before me, and cooking is a task I find rewarding and take advantage of when producing dishes for friends or for family.

My name and likeness make for collective humor. Being born Michael McDonald and unaware of the solo singer and Doobie Brothers band member for a majority of adolescence, I would often listen to people (usually over age 50) ask if I was famous or would occasionally even sing a verse from one of his songs to remind me who they were talking about.

My facial appearance reminds people "of that one actor," which I will oblige by offering hints: "You mean the guy from 'Superbad?' He was also in 'Juno.'" They would nod along, knowing the name is right there, but they just can't think of it at the moment.

"I think you mean Michael Cera."

"Right, do you get that very often?"

"As a matter of fact, people do say that."