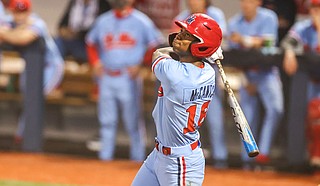 The University of Mississippi baseball team has begun the season with a hot start. The Rebels are 20-4 overall and 6-0 in Southeastern Conference play. UM is getting plenty of love in the polls as well.

UM moved to 6-0 in SEC with a sweep over at the time ranked University of Alabama. The Rebels outscored the Crimson Tide 22-12 in their three game series.

Freshman outfielder TJ McCants enjoyed a breakout series for the Rebels against Alabama. He batted .364 with five runs scored, three RBI, a home run and a double.

In game one, the Cantonment, Fla., native started a ninth-inning rally with a lead-off hit by pitch that ended in him scoring a run. That began an eight-run rally that ended with McCants driving in another run with a groundout RBI. The Rebels came back for the 9-6 series opening win.

McCants ended up scoring both runs in the Rebels 2-0 win in game two. He opened the scoring with a solo home run to right field in the fifth inning. In the eighth inning he scored on a single after he got on base. He went 2-for-3 at the plate with two runs scored and RBI to go with his home run.

The freshman outfielder went 2-for-5 at the plate as he scored two runs and added an RBI in game three. He drove in a run in the sixth and scored after a double by his teammate. In the ninth he reached base on a double and then scored later in the inning. UM finished the series with a 11-6 rout.

After his big series against Alabama, McCants was named SEC Freshman of the Week for his efforts. This is the first time a Rebel has earned the honor since Hayden Dunhurst during the Covid-19 shortened season of 2020.

Next up for the Rebels is a three game series against Top 25 ranked University of Florida. UM travels to face the Gators with game one on Thursday, April 1, game two on Friday, April 2, and the series final on Saturday, April 3.