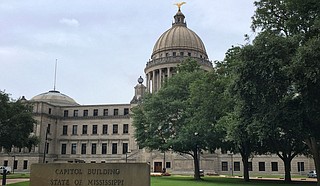 Mississippi legislators ended their 2021 session Thursday after agreeing on a teacher pay raise and voting to update parole rules in a state with crowded prisons. Photo by Kristin Brenemen

JACKSON, Miss. (AP) — Mississippi legislators ended their 2021 session Thursday after agreeing on a teacher pay raise and voting to update parole rules in a state with crowded prisons. But they left some big issues unresolved, including a proposal to overhaul the state tax system.

Legislators voted to increase spending for classroom supplies and preschool programs in the new state budget that takes effect July 1. Republican Gov. Tate Reeves signed a bill last week that authorizes a pay raise of $1,000 for most teachers and $1,100 for teachers in the early years of their career.

Legislators voted to give pay raises to some state employees, with agency leaders determining who will get how much. And they decided that state government employees will not have to pay more out of their own pockets for health insurance coverage; the state budget will cover an increase in that expense. Those proposals are awaiting the governor’s consideration.

Reeves must also decide whether to sign a bill that would expand the possibility of parole to more inmates. He vetoed a similar measure last year, but legislators said the one this year is more narrowly focused to address concerns raised by prosecutors.

Reeves has already signed a bill that says Mississippi will recognize job licenses from other states. Free-market advocates say this will help people more easily earn a living after a move.

During three months at the Capitol, legislators argued over some big issues that ended up going nowhere. House Speaker Philip Gunn and his allies pushed to overhaul the state tax structure. They proposed phasing out the income tax and half of the 7% grocery tax, increasing the sales tax on most items from 7% to 9.5% and increasing several other taxes. The House passed the tax plan a day after it was introduced. But Senate leaders blocked it.

“I don’t know of any policy item we as a Legislature could ever do that would benefit the people more or result in greater economic prosperity in our state than the elimination of the income tax,” Gunn said.

Hosemann said the House proposal this year was opposed by groups including the AARP. Mississippi does not tax retirement income, but retirees would have faced higher sales taxes.

“I think our goal should be to reduce taxes,” Hosemann said.

Hosemann and his allies pushed a bill that would have allowed a faster purge of names from voter rolls. Under the measure, local election commissioners would send a postcard to registered voters who do not cast a ballot in any local, state or federal election during a two-year period that includes two federal elections — a presidential election and a midterm congressional election. If voters fail to confirm their address within four years of receiving the postcard, or if they fail to vote during that time, the county would remove their name from the rolls. The bill never came up for a vote in the House, and it died.