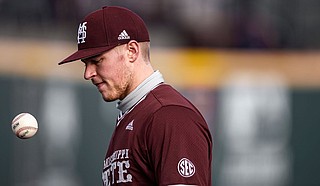 The next series against the University of Arkansas didn’t go well for the Bulldogs as the Razorbacks swept the three game series. That dropped MSU to 2-4 in SEC play before the Bulldogs hosted the Wildcats.

Left-handed pitcher Christian MacLeod took the mound in the series opener for MSU. MacLeod pitched a nearly perfect game for the Bulldogs in six innings of work.

The Huntsville, Ala., native retired 18 of the 20 batters he faced as he suckout 11 as he held Kentucky scoreless over six innings. He didn’t allow any Wildcats to reach third base and didn’t allow multiple base runners during his time on the mound.

MacLeod’s effort on the mound helped MSU to a 8-1 and the beginning of a three game sweep for the Bulldogs. The SEC honored MacLeod by naming him SEC Pitcher of the Week.

It is the third time this season that a MSU pitcher has won SEC player of the week honors. Joining MacLeod is Landon Sims and Jackson Fristoe, as SEC Freshman of the Week. MacLeod and Sims are the first multiple MSU pitchers to earn SEC Pitcher of the Week since 1999.

The sweep of Kentucky moved Mississippi State up the polls. Baseball America has the Bulldogs ranked No. 4, D1Baseball.com and USA Today have MSU No. 5 and Collegiate Baseball has MSU No. 12.

MSU took a midweek win over Southern University to up their overall record to 21-7. The Bulldogs are 5-4 in SEC and third in the SEC West standings behind Arkansas and the University of Mississippi.

The Bulldogs hit the road to face Auburn University in a three game series this weekend. The Tigers are last in the SEC West with a 1-8 record. The series runs from Friday to Sunday with the Friday and Saturday game on SEC Network+ and the Sunday game on the SEC Network.