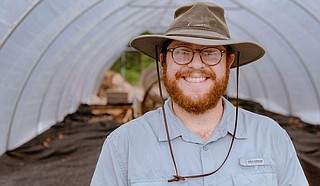 Matt Casteel spent years working for hunger relief around the world with an international relief agency. Now he has brought his passion for helping others home to Jackson with a unique business that focuses on filling the gaps in food systems locally.

Casteel, as the son of a Methodist minister, grew up all around Mississippi before landing in Jackson as a student at Millsaps College. After graduating from Millsaps, Casteel received an opportunity to live and work in Wuhan, China, as an English teacher. He lived for more than a year in the city that has since become famous around the world as ground zero for the COVID-19 pandemic. He says that it was an experience that helped shape the person he has become.

“Wuhan, in my mind, is just an incredible place where I forged so many interesting, unique, and helpful and loving relationships that I have to this day,” Casteel says. “It was tough hearing all the rhetoric and the harmful stuff being said, you know, knowing them, and being close to your heart and having been a resident. Wuhan’s an amazing place.”

Casteel says that his time in Wuhan also sparked in him a yearning to travel that contributed to his decision to pursue a career involving global travel. That career took the form of a position with an international hunger relief organization that he held for a decade. In that role, based in Jackson, he traveled to 22 different countries and six continents, as well as around the United States, working with volunteers with the mission of ending hunger worldwide.

In 2018 a growing change in his understanding of food systems and food insecurity led Casteel to leave the organization for which he had been working and to search for a new approach to solving the problem of hunger.

“There was just a big paradigm shift in my thinking of, you know, instead of working through entities, doing these large-reaching relief programs which ended up kind of getting super corporatized. At the time, I was moving away from that model to more of a localized, microsystems, hyper-local programming that was all about filling space in the food system,” Casteel says.

Casteel goes on to explain that Mississippi has the highest rates of any state in the nation in the areas of obesity, food insecurity and food waste per person. While the state’s high rates in all three of those areas may seem counter-intuitive, they indicate a serious problem with the state’s food system. Casteel’s goal was to find a way to help.

“Here in Jackson, we have a lot of great relief organizations—soup kitchens and gleaning organizations­—people who are in every different part of that food system, reaching out, trying to plug the holes and be a part of a more resilient food system. … But there really wasn’t a clear functioning group, organization, entity, that was focused on waste. And so, I thought, ‘Let’s look into this,’” Casteel explains.

His research revealed that almost 40% of our organic food waste goes into landfills, and of everything in our landfills, 30-40% is compostable. Therefore, he points out, composting provides an opportunity to make large strides toward cleaning up our landfills. But reducing waste is not the only value of composting. The result of composting food waste is an all-natural plant fertilizer that sequesters carbon, putting it back into the soil to contribute to plant life, as well as replacing synthetic fertilizers, which can seep into our water system.

“That option, scientifically, is proven over and over to be a better option, and an option that’s regenerative, right. … It’s not just ‘Hey, let’s sustain the status quo. Let’s be sustainable.’ That’s good, but what’s great is ‘Let’s give back and let’s regenerate the system,’” Casteel says.

The ultimate result of Casteel’s research is his company, Wurmworks, a worm-farming enterprise that uses earthworms in the composting process. Wurmworks is located in the Ecoshed, an experimental mixed-use space in Jackson, and operates a booth in the Mississippi State Farmer’s Market every Saturday. The company sells vermicompost and vermicompost extract, the natural fertilizers produced as a result of the worm-aided composting process, as well as worms and other products for setting up an at-home composting bin. They also provide food waste diversion services through which food waste is collected for composting and vermicompost or vermicompost extract is received in return.

Casteel has plans for expansion of Wurmworks’ services in the near future, with a food bank, among other things, in the works. In the meantime, he has been selected as a Culture of Health Leader through the Robert Wood Johnson Foundation. The three-year leadership program is designed to support and connect leaders nationwide who are working to make changes toward a healthier culture.

“We donate compost through that program to the community organizations that are all about engaging children and focusing on education to bring more people into agriculture in one way or another, or the food system,” Casteel says. “That’s a huge mission of what we’re doing at Wurmworks, is help create the new generation of farmers and growers and, you know, waste reductionists and composters. … We’re really trying to create a more resilient community.”

To learn more about Wurmworks and composting, visit wurmworks.com or search @wurmworks on social media.