Mississippi Governor to Decide on Expanding Possibility of Parole 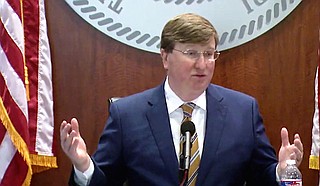 Mississippi Gov. Tate Reeves faces a Thursday deadline to act on a bill that could make more inmates eligible for the possibility of parole in a state with one of the highest incarceration rates in the nation. Photo courtesy State of Mississippi

JACKSON, Miss. (AP) — Mississippi Gov. Tate Reeves faces a Thursday deadline to act on a bill that could make more inmates eligible for the possibility of parole in a state with one of the highest incarceration rates in the nation.

The Republican governor could sign or veto Senate Bill 2795. If he does nothing, it would become law July 1 without his signature.

On March 30, the Senate voted 35-13 and the House voted 91-27 to pass the final version of the bill. Both chambers are controlled by Republicans, and some conservative groups are pushing the governor to sign the bill.

Reeves vetoed two criminal justice bills last year, including one that would have expanded parole eligibility. He said prosecutors and law enforcement officials told him the 2020 parole bill would create a risk of release for violent inmates.

A key difference is that this year’s bill would not allow parole consideration for anyone convicted of murder, said Senate Corrections Committee Chairman Juan Barnett, a Democrat from Heidelberg.

Mississippi has some people serving long sentences for nonviolent offenses, and its prison system came under Justice Department investigation last year after outbreaks of violence among inmates.

Current state law says inmates convicted of some crimes after June 30, 1995, are ineligible for parole. The House Corrections Committee chairman, Republican Kevin Horan of Grenada, said the bill would allow the possibility of parole for people convicted of armed robbery.

People convicted of some crimes would remain ineligible for parole, if Senate Bill 2795 becomes law. Those crimes include murder, human trafficking, drug trafficking and many sex crimes.

Among those pushing Reeves to sign the bill into law is Empower Mississippi, a group that advocates a limited role for government.

“SB 2795 seeks to bring Mississippi more in line with Texas, offering parole eligibility to more people through a proven system of vetting who belongs to stay behind bars versus who has demonstrated rehabilitation and earned a second chance, while excluding serious offenses like murder, sex offenses, and human trafficking from eligibility,” Steven Randle, Empower's director of justice and work, said in a statement this month.

Barnett said opening the possibility of parole to some inmates could provide hope. He said inmates would be encouraged to take part in job training or other programs offered by the Department of Corrections. He said good behavior would help during parole hearings. The five members of the state Parole Board are nominated by the governor and confirmed by the state Senate.