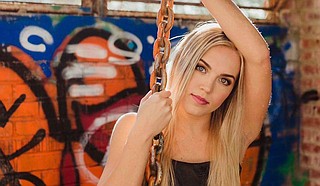 When Casey Collier Rogers was 4 years old, she watched with rapt attention as her mother and her best friend taught students to dance at a studio in Clinton, Miss. Once Rogers was old enough, she joined the duo’s lineup of students, taking classes in dance, cheer and tumbling.

“I never stopped performing, and I was always in love with it,” Rogers says of her youth in competitive cheer and dance. The love would follow her all the way to college, where she earned a bachelor’s degree in dance (performance and choreography) from the University of Southern Mississippi in Hattiesburg in 2020.

After finishing college, Rogers received an offer to be a professional dancer for a modern Christian dance company in Houston, Texas. She accepted it, and she and her husband relocated to the Lone Star State, putting them nearly 500 miles from Rogers’ parents and two brothers, Cody and Colby. “I missed them,” Rogers reflects, but an opportunity to return to her hometown came when Mike and Debbie Cashon, the long-time owners of Exalt Dance and Cheer, asked her to take over their business.

“It’s something I’ve dreamed of doing for a long time,” Rogers says. “They said the offer was on the table and that they were considering retiring in the next year or so. After a lot of praying about it and talking about it, we felt confident that this was the time to do it and to jump on the opportunity.”

The dancer doesn’t plan to take her new position lightly, as she notes that she hopes to expand the business in the coming years. “I hope it becomes a staple in the Clinton community and hopefully even in the surrounding communities,” Rogers says, noting that she believes Exalt Dance and Cheer’s mission-oriented approach could help her achieve these goals. “I’m a Christian, and I believe that our dancing and performing can be used to glorify God, and that’s one thing that I hope to share with each student. It gives them an outlet to express themselves in worship and to grow into who they want to be.”

Rogers’s students, who range in age from 2 years old to their late teens, have a variety of performance options to choose from in order to grow themselves as dancers, with the studio offering classes in ballet, tap, jazz, contemporary, modern and improvisational dance, along with sponsoring competitive teams for both cheerleading and dancing. Through the wide array of classes, Rogers aims to ensure that each student at Exalt is able to feel that he or she belongs. “I hope it’s a place where a lot of people want to come train and be supported, and I hope it’s a safe haven where kids can do what they love,” Rogers says.

The far-reaching impact of a student’s ability to do what they love is not lost on Rogers, who says that her decision to return to her hometown to teach is her way of giving back to her own dance instructors. “I want to be one of those teachers who ignited my love for dance,” she remarks.

The passion that Rogers’ teachers imbued her with has followed her throughout her life, as she says that even now that she spends her days teaching dance and cheer techniques and routines, her favorite way to unwind is to dance alone in her studio. “It’s how I relieve stress and how I ground myself,” she says of the pastime. Outside of the studio, she and her husband also enjoy trying new things, attending her brother’s baseball games and doing “anything outdoors,” especially activities that involve their dog, Shep.

To learn more about Exalt Dance and Cheer, call 601-960-1560 or visit exaltdanceandcheer.com.