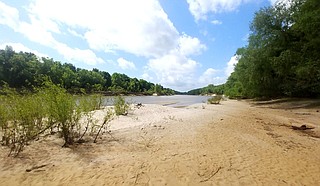 Jackson’s city dwellers wanting to beat the dog days of summer don’t have to make the three-hour trip to the Mississippi Gulf Coast to enjoy the sun and sand, as Belhaven Beach is located a stone’s throw from downtown Jackson, on the west bank of the Pearl River, just south of Jackson Waterworks.

“I think one of the biggest draws of Belhaven Beach is that not many metro areas have a beach like that,” Andy Hilton, a volunteer with the Pearl Riverkeeper—a nonprofit aspiring to improve the Pearl River Watershed through restoration, advocacy and education—says of the stretch of beach just east of the college. “The Pearl River serves as a natural outlet in a way that a lot of urban areas just don’t have.”

Despite its uniqueness, Belhaven Beach has experienced its share of difficulties, as water activities are currently forbidden from the spillway to Pearl due to sewage leaks in the city of Jackson. “I wouldn’t do more than wade there,” Hilton admits.

“They monitor the water, and sometimes the water is cleaner than other times, but you can’t unhear that there’s sewage in the water,” Hilton added.

Even with a downturn in the watersports and fishing that were once so popular on the shores of Belhaven Beach, Hilton says the area can still make for an enjoyable day trip for Jacksonians, with volleyball, frisbee and picnicking remaining popular pastimes of local beach-goers. Hilton does hope, though, that anyone who takes advantage of the downtown oasis will work to keep the area clean and free of trash.

“I wish everyone who visits Belhaven Beach knew that they should clean up after themselves,” Hilton remarks. “I wish they realized that other people are cleaning up behind them.”

All sandbars on navigable rivers are considered public property, so the task of tidying up after local litterbugs falls to volunteers like Hilton, who participates in the “Clean Sweep” each year, which combs through the refuse of the Pearl River from Neshoba County to the Gulf Coast.

Hilton is hopeful that the heavy task of keeping public waterways and shorelines clean will eventually be distributed more evenly if the City of Jackson takes an interest in sandbars like Belhaven Beach.

“It’s not really officially a park. Right now, it’s kind of a no-man’s land,” Hilton concludes. “I’d like to see the city promote the area and attract more people there.”