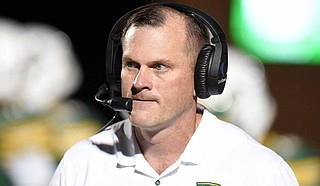 Belhaven University football did something in the spring of 2021 that the program hadn’t done since 2012. The Blazers finished the season with a winning record at 3-2 overall, the longest winning streak since 2012.

It was an ugly beginning for the Blazers with blowout losses to the University of Mary Hardin-Baylor and East Baptist University. Belhaven was outscored 85-16 in the first two contests and gave up over 40 points in both games.

The Blazers were able to turn things around and win the next three consecutive wins. The defense went from giving up 42.5 points a game to giving up just 16 points per game over the final three matchups.

It wasn’t just the defense that got better after the terrible start. The offense came alive as well and went from averaging eight points in the first two games to 30.7 points per game.

The turnaround demonstrates head coach Blaine McCorkle’s incredible work with the team. After the rough start, McCorkle was able to rally his squad to finish strong.

McCorkle was hired in January of 2018 and set about rebuilding the program that had struggled in recent years. His first season saw the Blazers go 2-8 overall and winless at home. In 2019, the Blazers finished 2-8 again and were winless on the road.

The job McCorkle did during the spring season earned him American Southwest Conference Coach of the Year honors. McCorkle did a commendable job getting his team on track and improving as a global pandemic raaged.

McCorkle needs to keep the momentum from the spring going this fall. Currently, it looks as if the Blazers will play a normal season of all football with a full slate of games.

This will be a true test to see how far McCorkle has built his program. The sample size of just five games is good but a full season will see if Belhaven is ready to take the program to the next level.

McCorkle will get the first chance to see if the spring momentum carried over to fall on Sept. 2 against Millsaps University. The Blazers get the Majors at home in a game that didn’t happen last season.

The next week Belhaven will begin its ASC schedule at home against Southwestern University. But a slow start will get McCorkle to work his magic again to get the Blazers on track.