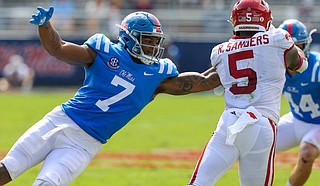 To few’s surprise, the University of Mississippi offense has been explosive and exciting in the 2021 season. The Rebels brought back quarterback Matt Corral and head coach Lane Kiffin.

Defense, though, was another matter for the Rebels going into the 2021 season. UM finished dead last in the Southeastern Conference in defense in 2020. The unit gave up 519 yards per game and 38.3 points per game.

That left little margin for error for the offense because the defense couldn’t make many stops. If the Rebels wanted to finish better than the 5-5 record from 2020, the defense would have to improve.

While it wasn’t a worst-to-first improvement, the UM defense did in fact score better in 2021. The unit only allowed 427.8 yards per game and 25 points per game. That is 91.2 yards fewer per game and 13.3 fewer points allowed per game for the past season.

The defensive improvement helped UM win 10 games for the first time in the regular season and a New Year’s Six Bowl game against Baylor University. These changes for the better didn’t go unnoticed around the conference when postseason honors were distributed.

Williams enjoyed his best season with the Rebels in 2021. He has a school record of 12.5 sacks with the bowl game still to be played. His sacks place him in fourth place at the FBS level.

The Montgomery, Ala., native finished with 56 total tackles, 30 solo tackles, 15 tackles for a loss, eight quarterback hits, four forced fumbles, one fumble recovery and one pass break-up. His 56 tackles are the most for a UM defensive lineman since 2018.

Williams is currently in third place on the school’s career sack list with 22.5 career sacks. He is seventh in career tackles for a loss in school history with 32.5. Williams is the only Rebel to make First-Team All-SEC. Corral and running back Jerrion Ealy were named 2021 Second-Team All-SEC—Corral at quarterback and Ealy as an all-purpose player.

UM doesn’t return to the field until Saturday, Jan. 1, in the AllState Sugar Bowl against Baylor with kickoff at 7:45 p.m. on ESPN. A victory there will get the Rebels to an 11-win season.