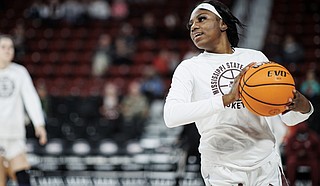 Freshman Denae Carter has played a major part in the Bulldogs’ outstanding non-conference play, with Philadelphia, Pa., native Carter playing in all 12 games and starting in two so far this season. Photo courtesy MSU Athletics

Mississippi State University women’s basketball team has begun to bounce back this season after a tough 2020-2021 season. Last season, the Bulldogs went 10-9 overall and 5-7 in Southeastern Conference play.

On top of dealing with COVID-19, the Bulldogs were adapting to a new head coach. Combined, those factors impacted the squad, which managed to just finish with a winning record.

This season, MSU is 9-3 overall and has yet to start conference play. Going 9-3 in out of conference play is a major boost before SEC play begins near the end of the year.

Freshman Denae Carter has played a major part in the Bulldogs’ outstanding non-conference play, with Carter playing in all 12 games and starting in two so far this season. The Philadelphia, Pa., native has upped her game the last few weeks as she is starting to find her footing at the college level. Carter has posted three straight double-doubles in the last three games, and MSU went 2-1 in those games.

Against Troy University, Carter scored 11 points, grabbed 12 rebounds and blocked one shot. MSU came up short in the 73-66 loss to open the Mississippi State Classic.

Carter scored a season and current career-high 17 points against Jackson State University in her first career start. She added 13 rebounds, three blocks and two steals in a 74-66 win over the Tigers. She tied a career high against South Carolina State University and pulled down a season-high tie of 14 rebounds with 12 points, four blocks and two assists in MSU’s 85-47 win.

The three straight games of double-doubles earned Carter the honor of SEC Freshman of the Week. Over the three games she had 40 points, 39 rebounds, eight blocked shots, two steals and two assists.

Carter is averaging 7.6 points, 8.3 rebounds and 2.3 blocks per game with nine steals and eight assists. She is first on the team in rebounding and blocks and fourth on the team in scoring. She leads SEC freshmen in blocks with 28 so far on the season.