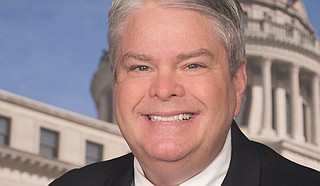 “This is about transparency,” Republican Rep. Steve Hopkins of Southaven said Feb. 4 on the House floor. Hopkins said there have been issues with finance reports not being made public "in a timely manner.” Photo courtesy State of Mississippi

JACKSON, Miss. (AP) — Mississippi’s secretary of state could soon face a strict deadline for posting campaign finance reports, a demand the office says it is not equipped to handle without more employees to carry the workload.

“This is about transparency,” Republican Rep. Steve Hopkins of Southaven said Feb. 4 on the House floor. Hopkins said there have been issues with finance reports not being made public "in a timely manner.”

However, in a statement Friday, Mississippi Secretary of State Michael Watson said his office is not capable of uploading finance reports in a day. He said doing so would require additional funding to “develop and expand” its system.

“While the Secretary of State’s Office fully supports transparency in all levels of government, it is not reasonable to expect our office to make these reports available online within a day of receipt,” Watson said. “We currently have one full-time employee devoted to Campaign Finance and would need many more to complete this task as the bill is currently written.”

“Scanning reports of this magnitude is nowhere near a one-day task,” Watson said. “Using five minutes per report as an average, working all day, every day, it would take more than eight forty-hour weeks to post this information.”

Additional time is required for contacting individuals, correcting errors, providing guidance, checking lists to see who has and has not filed, he said.

Watson suggested the Legislature instead mandate all finance reports be filed online. He said that change would allow for “a quicker, more transparent process.”

If House Bill 718 were to become law, the new rule would take effect during the 2022 election cycle.

The bill moves to the Senate for more work.