Weather Knocks Out Water in Parts of Mississippi, Louisiana 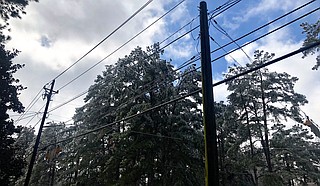 Icy winter weather has left most of the 161,000 residents of Mississippi's capital with little or no running water for days, and the mayor says it's unclear when water service will be restored. Photo by Kristin Brenemin

JACKSON, Miss. (AP) — Icy winter weather has left most of the 161,000 residents of Mississippi's capital with little or no running water for days, and the mayor says it's unclear when water service will be restored as freezing temperatures have knocked out power and water to parts of the Deep South.

The icy conditions are part of a viciously cold spell that has also devastated Texas, leaving hundreds of thousands without electricity there as temperatures plummeted and cutting water supplies in many areas.

In Mississippi’s capital of Jackson, many people had been without running water to flush toilets, take showers or cook since Monday.

Linda Weathersby, an administrative assistant at the mayor’s office, lives in an apartment building for seniors in Jackson. The building's 85 residents have been without water since Monday, and the assistant manager was bringing bottled water door-to-door to residents, she said. She also went outside to gather snow to melt so she could flush her toilet.

“I’ve been out there getting water, and my back’s hurting now,” she said.

The city has made water available at fire stations and officials are working to set up locations for people to pick up water. But Weathersby said she worries about elderly people like her who won’t be able to get to those locations. She said her sister lost power Wednesday and was still without it Thursday.

“This is one of the unfortunate facts that I have to deliver,” he said. “But I owe you honesty and I owe you truth so we can manage how we prepare.”

Lumumba said public works crews were working to pump as much water as they can to refill the city’s tanks. The city is approaching a critical shortage in chemicals used to treat the water, as road closures are making it difficult for distributors to make needed deliveries, he said. But at the same time, more people were staying at home during the extreme weather so water usage was skyrocketing.

“We are dealing with an extreme challenge with getting more water through our distribution system,” he said.

Power crews worked to restore service to homes and businesses that were plunged into darkness across three states. According to PowerOutage.us, about 221,000 customers across Louisiana, Mississippi and Alabama were without power as of Thursday night with the vast majority of the outages in Louisiana and Mississippi.

Ron and Laura Jenkins of Preston, Mississippi, lost power at around 6 p.m. Wednesday. They left their house at 7:30 a.m. Thursday and had to drive 90 miles (145 kilometers), stopping to cut their way through fallen branches, before they found a store in Madison, Mississippi, with generators in stock. It took them 3 and half hours one way.

“Our whole day has been trying to get this generator, moving limbs out of the road and traveling through all of the ice,” Ron Jenkins, 67, said. “It’s pretty bad out there.”

Parts of Interstate 20 were at a standstill in Louisiana, state police said, and state wildlife agents used 4-wheel-drive trucks to get essential employees, including some at a veterans’ home, to work. The Willis-Knighton Health System in northwest Louisiana said more than 160 off-duty Shreveport and Bossier firefighters and police officers, as well as others have helped get health care providers to work. The hospital asked for assistance from people with trucks to help traverse difficult and icy roadways.

Multiple roads were icebound in Mississippi. Another night of frigid temperatures was expected Thursday, forecasters said, so problems could persist. Temperatures were expected to warm over the weekend.

Louisiana Gov. John Bel Edwards said 1 million people in his state, which has 4.6 million residents, remained under a boil water advisory by midday Thursday, while another 245,000 people were grappling with water outages. Hospitals in Lake Charles, Shreveport and Bossier Parish were receiving water deliveries, he said.

Edwards said Entergy told him it expects the “vast majority” of the 20,000 customers that have been without power since Monday – largely in the Baton Rouge area – should see power restored by Thursday night. But a second influx of icy weather across north Louisiana was causing new outages.

Several parishes were receiving generator deliveries through the Louisiana National Guard, Edwards said. In the northeast Louisiana city of Vidalia, resident Betsy Sawyer hadn't had electricity since Wednesday evening and the water had been cut off for part of Thursday. She said there was a thin stream of water Thursday night and the burners on her stove were the chief source of heat.

“My freezer stays stocked,” said Sawyer, who added that she provided hot meals for two Vidalia police officers and two Concordia Parish Sheriff’s Office deputies Thursday. “We knew that the water was going to be shut off so we filled the bathtub up with water.” She said crews were working to repair lines and restore power. “Lots of trees down,” she said. “Everybody’s scrambling, just doing their best.”