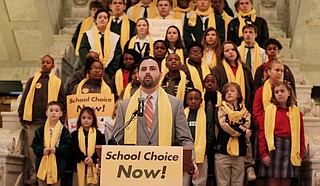 Grant Callen, president of “school choice” advocacy group Empower Mississippi, speaks before a crowd at the Capitol at the beginning of National School Choice Week in February. Photo by Imani Khayyam

JACKSON, Miss. (AP) — Mississippi House leaders are pushing to decrease some state taxes and increase others.

House Bill 1439 would reduce the amount people pay in the state personal income tax, and it would cut the 7% grocery sales tax in half.

The bill passed the House Ways and Means Committee on Monday. It will move to the full House for more debate by a Wednesday deadline.

A group that advocates for limited government, Empower Mississippi, said the bill would "return dollars to the pockets of hardworking families" by increasing the personal income tax exemption.

A group that advocates for public schools, The Parents' Campaign, said the proposed tax changes would threaten school funding and endanger the chances of increasing teachers' pay.