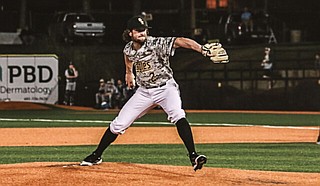 The Hammond, La., native probably couldn’t pitch much better in his first career start. Pitching the first game of 2021 against Northwestern State University, Stanley was in control the whole time he was on the mound.

Stanley went six innings with 13 strikeouts, one hit and one walk. He didn’t allow a single run and set a career high in strikeouts. The 13 strikeouts were most by a Golden Eagle on opening day since Scott Berry took over as head coach.

The 13 strikeouts were the most since Nick Sandin fanned 13 hitters against Rice University on March 30, 2018. Stanley struck out the first five batters he faced and three times struck out three batters in an inning.

Stanley allowed just two baserunners during his pitching gem with the first coming with a second inning double and the second in a sixth inning walk. He finished his outing by striking out six of the final batters he faced.

After making his first 37 appearances as a relief pitcher, Stanley earned C-USA Pitcher of the Week honors for his first start. It is the first time Stanley earned the award and eighting time a USM pitcher has been awarded the honor since 2018.

Stanley started his college career at Meridian Community College and finished with a 5-5 record as a freshman with 12 appearances and nine starts. As a freshman he posted a 6.79 ERA with 47 strikeouts and 14 walks.

He improved his sophomore season with a 9-1 record and two saves in over 20 appearances. Stanley posted a 4.12 ERA with 101 strikeouts in 73 1/3 innings to earn a spot with USM.

In his first season with the Golden Eagles, Stanley appeared in a team-high 29 relief appearances as he posted a 5-2 record and team-high four saves. He notched a 3.07 ERA with 31 strikeouts and 10 walks during 41 innings of work.

Last season before Covid-19 stopped the season short, Stanley appeared in eight games. He won two and earned the save in three others. His short season ended with 22 strikeouts and one walk in 12 1/2 innings of work.

The 2-2 Golden Eagles hit diamond again at home in a three game series against the University of Connecticut. USM starts the series on Friday, Feb. 26, at 4 p.m. with game two coming on Saturday, Feb. 27, at 1 p.m and the series finale on Sunday, Feb. 28, at 11 a.m.

A major midweek matchup comes as USM travels to Pearl, Miss. to take on Mississippi State University at Trustmark Park with first pitch at 6 p.m.