Mississippi Announces Vaccine Rollout for Those Over 65 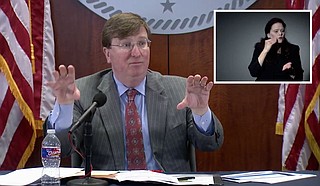 Gov. Tate Reeves said Monday that people over the age of 75 will have access to the vaccine, beginning next week, at private clinics and drive-through sites. The week after, those over 65 will become eligible for the vaccine. Photo courtesy State of Mississippi

JACKSON, Miss. (AP) — Officials in Mississippi announced a plan Monday to streamline access to coronavirus vaccines for vulnerable populations in the coming weeks. The news comes as the U.S. government officials reported a major acceleration of the vaccine rollout over the weekend after a slow and uneven start to the campaign.

“We want to make sure that as many doses as we get this week, we're getting that many shots in arms," Gov. Tate Reeves said during a news conference. "It doesn't do us any good if it’s sitting on the shelf.”

The Republican governor said Monday that people over the age of 75 will have access to the vaccine, beginning next week, at private clinics and drive-through sites. The week after, those over 65 will become eligible for the vaccine.

“We know that we cannot afford delays in protecting those who are at the greatest risk," Reeves said. "We must focus on saving lives.”

The Department of Health has 18 high-volume drive-through sites prepared for the vaccine rollout. Approximately 174 private clinics have also requested vaccines, State Health Officer Dr. Thomas Dobbs said. He did not immediately release the names of the 174 clinics.

Mississippi in mid-December received its first doses of the Pfizer-BioNTech vaccine and a similar one made by Moderna. Reeves said 163,750 doses have been distributed to Mississippi as of late last week. Close to 80,000 are designated for long-term care facilities through a partnership with the federal government, CVS and Walgreens pharmacies.

As of late last week, 1,105 of those doses had been distributed, Reeves said. Mississippi's health care providers have been shipped 85,750 doses, 21,653 of which had been administered as of last week.

As of Monday, the Centers for Disease Control and Prevention reported that nearly 4.6 million shots have been dispensed in the U.S.

“We do strongly anticipate another surge following the holidays," Dobbs said. "It’s kind of been a recurring theme.”

Reeves said it’s time to start giving as many people the vaccine as possible instead of being slowed by having officials overanalyze who should receive the vaccines first.

“In my mind, part of the reason for the holdups has been the CDC decision to hold back and focus on who should be getting the vaccine and who should get it first," he said. "We need to move fast and we need to get it out there. We don’t need to analyze and prioritize for months and months and months on end.”

Mississippi, with a population of about 3 million, has reported at least 4,884 deaths from COVID-19 as of Sunday evening. There have been at least 223,677 total cases of coronavirus since the start of the pandemic, the Health Department said.